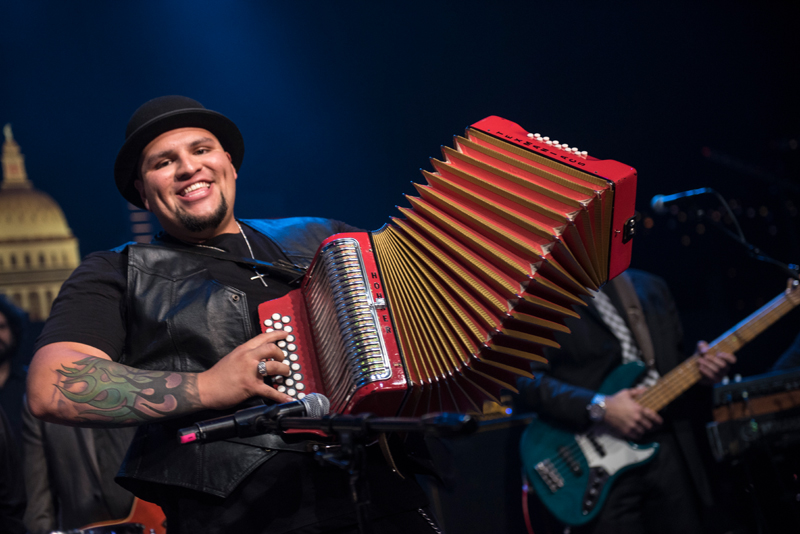 The future of the “Tex-Mex” ,accordion rests firmly in the hands of accordion wizard, Josh Baca.
The Albuquerque, New Mexico native was born into a musical family. His Grandfather (Max Baca Sr. - accordion ), Father (Jimmy Baca - accordion) , and Uncle (Max Baca Jr. - bajo sexto) heavily influenced and helped carve out his musical journey. Josh’s father Jimmy Baca showed josh the basics at the age of 5 (It is rumored as an infant, Josh would alternate between,wake up, accordion, bottle, accordion, nap. He maintains the same schedule to this very day.)

He has performed live with Flaco Jimenez, Augie Meyers, Colin Hays (Men At Work), Los Lobos, Los Lonely Boys, Kevin Fowler, Grupo Fantasma, Tom Russell, Bob Schneider, Garrison Keillor , Joe Ely , Los Super 7, Lucinda Williams, Alejandro Escovedo, Jimmy Vaughn, Johnny Nicholas, Lloyd Maines, The Revelers, Wiley & The Wild West, Treme Brass Band , Alex Meixner , Tal Wilkenfeld , Leftover Salmon, and many others.
Josh Baca toured with Los Lobos taking guitarist David Hildalgos place while we was recovering from a terrible injury converting guitar riffs and solos to the accordion he continues to perform with them to this day when needed
Josh’s mission is to prove how cool and versatile the accordion truly is . He is delighted to teach workshops , and perform educational outreach for festivals, schools, etc..He was a master instructor for 2016 Folk Alliance Conference, at the age of 24. Honored , the once apprentice is now sharing the love, passion , lessons and principles he was Blessed to learn firsthand.
In 2019 Josh was American Grammy nominated with Los Texmaniacs Smithsonian folkways recording Cruzando Borders.