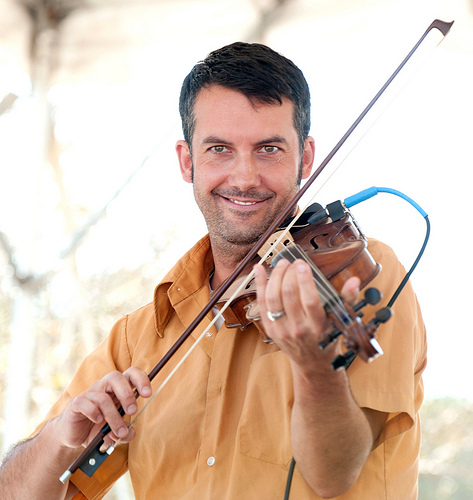 Grammy Award winning multi-instrumentalist, traditional music instructor, and storyteller Mitch Reed was born in Bayou Vista, Louisiana and raised in Lafayette by musicians and storytellers from Mamou. When he was 12 he started playing the cello and at 15 began playing the fiddle. By 17 Mitch was touring and performing with Dewey Balfa, Marc Savoy and DL Menard. Over the years he has built an extensive repertoire and learned an old style of playing which is evident in his sound today.

Since 2008 he has performed on four Grammy Nominated albums. In 2009 Mitch was awarded a Grammy with BeauSoleil for the album “Live at the 2008 New Orleans Jazz & Heritage Festival”.

Of course he’s also a Traditional Music Instructor. Besides offering private lessons, group classes, and online fiddle breakdowns he has taught at Fiddle Camps hosted by Jay Ungar, Mark O’Connor, and Louisiana Folk Roots. In addition he has worked with the Smithsonian Institution Office of Folklife Programs in Louisiana schools and at International conferences since 1989.

Mitch recently retired from 11 years on the road as the bass player and second fiddler with BeauSoleil avec Michael Doucet. In addition he expanded his music school from Louisiana to Maine with his wife and their family. These changes have afforded him the opportunity to continue passing on the unwritten tradition of Cajun fiddling and storytelling, while exploring the connections between the musical traditions of Acadia and Acadiana.

Fun and relaxed, yet challenging.

I suggest a notebook and an audio or video recorder. Skype and Zoom lessons can be recorded.