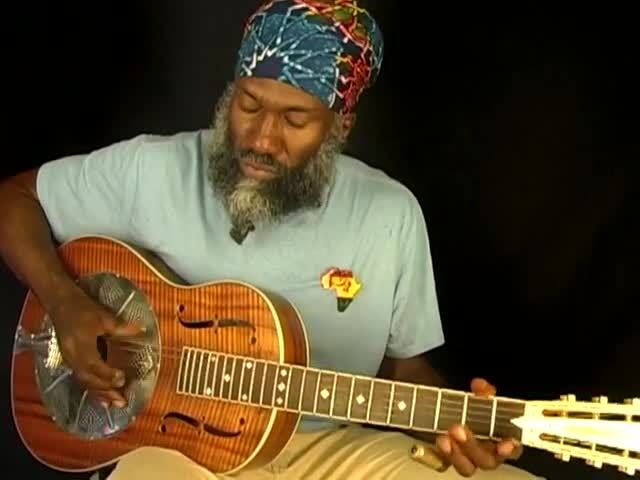 Corey Harris was born in Denver, Colorado to parents from Texas and Kentucky. He is a guitarist, vocalist, songwriter and band leader who has carved out his own niche in blues. A powerful singer and accomplished guitarist, he has appeared at venues throughout the North America, Europe, Brazil, The Caribbean, West Africa, Asia, Australia and New Zealand. He began his career as a New Orleans street singer, travelling throughout the southern U.S. In his early twenties he lived in Cameroon, West Africa for a year, which had a profound effect on his later work. He has recorded many old songs of the blues tradition while also creating an original vision of the blues by adding influences from reggae, soul, rock and West African music. His 1995 recording, Between Midnight and Day, is a tribute to the tradition of acoustic blues. Subsequent recordings, such as Greens From the Garden (1999), Mississippi to Mali (2003), and Daily Bread (2005) show Harris' maturation from interpreter to songwriter. Some of his imaginative compositions are marked by a deliberate eclecticism; other works stay true to the traditional blues formula of compelling vocals and down-home guitar. With one foot in tradition and the other in contemporary experimentation, Harris is a truly unique voice in contemporary music. He has performed, recorded, and toured with many of the top names in music such as BB King, Taj Mahal, Buddy Guy, Henry Butler, R.L.Burnside, John Jackson, Ali Farka Toure, Dave Mattews Band, Tracy Chapman, Olu Dara, Wilco, Natalie Merchant, and others. His additional recordings include Fish Ain't Bitin' (1996), Vu-Du Menz (with Henry Butler, 2000), Downhome Sophisticate (2002), and Zion Crossroads (2007).blu black ( 2010 ). DC Blues (2009, with Phil Wiggins), Fulton Blues (2013), Louisa County Blues (2019).

In 2003 Harris was a featured artist and narrator of the Martin Scorcese film, "Feel Like Going Home," which traced the evolution of blues from West Africa to the southern U.S. In 2007, he was awarded a $500,000 MacArthur Fellowship – commonly referred to as a “genius award” – from the John D. and Catherine T. MacArthur Foundation.

I like to first learn what the student's objectives and their level of mastery, then we work from there. I like to teach songs as the best way to teach riffs and techniques. I encourage students to put their own originality and voice into their music so that it can be a vehicle for their individual personal expression. I usually break a song down into four or five parts (chords and melody, bass, singing, endings and fingerpicking). I find the best results are obtained when we take it slowly with attention to detail. I also like to send students audio messages via cell phone with the music slowed down so that they can better understand and have a copy to go back to whenever they want to practice.