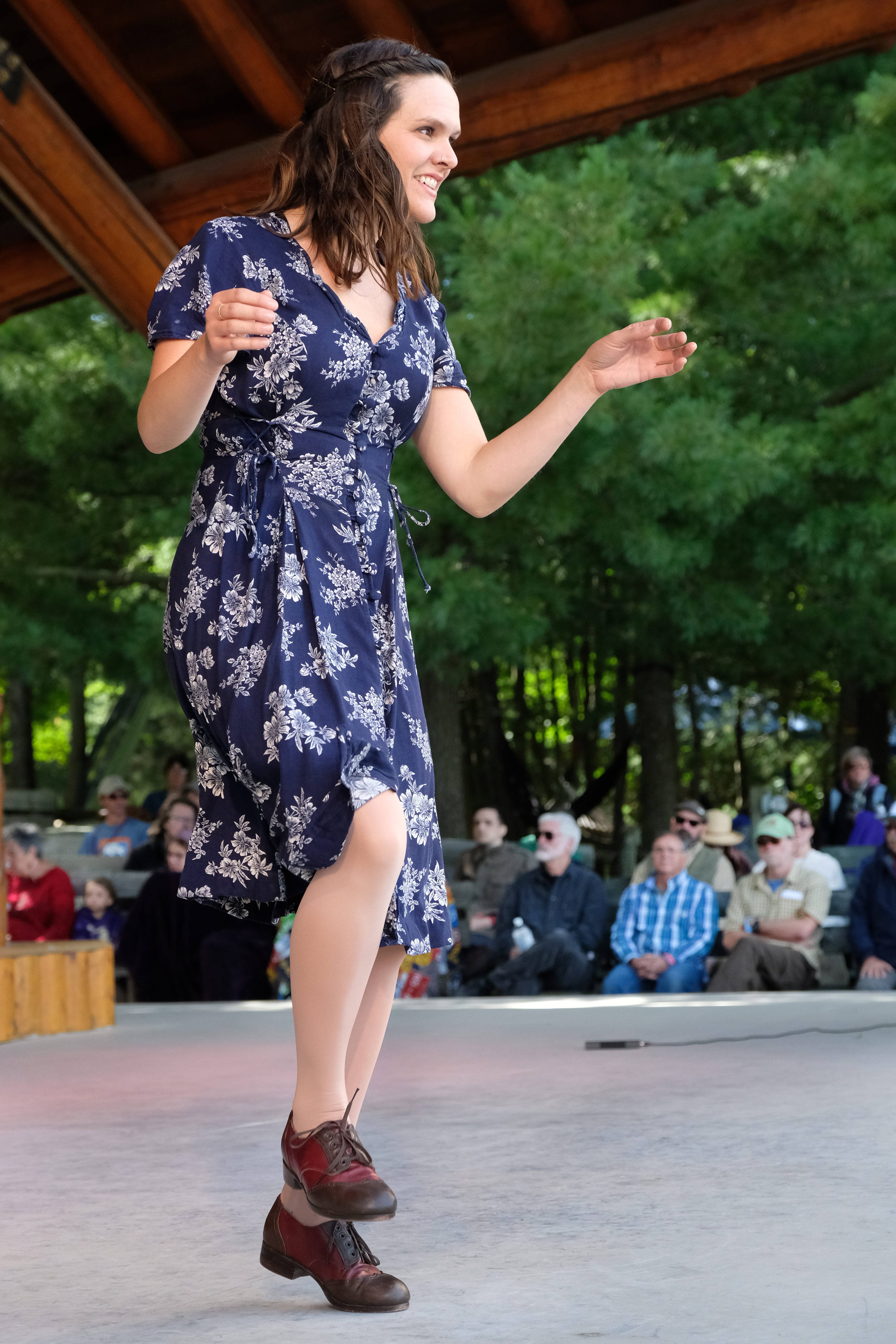 Becky Hill is an accomplished and sought after percussive dancer, Appalachian square dance caller, and choreographer. Becky has worked with Footworks Percussive Dance Ensemble, Rhythm in Shoes, Good Foot Dance Company and studied with an array of percussive dance luminaries.

In 2013, she was involved in Wheatland Music Organization’s Carry It On... Project under the directorship of Sharon Leahy where she was commissioned to choreograph two dance pieces in honor of the festival’s 40th anniversary. In 2014, she was awarded a West Virginia Division of Culture and History Professional Development Grant to further her study of percussive dance and conducted her 200 Hour Hatha Yoga Teacher Training at Rishikesh Yog Peeth in India. She served as Artist in Residence at Davis & Elkins College from September 2013 - December 2015 where she coordinated The Mountain Dance Trail of Augusta Heritage Center and co-directed the Appalachian Ensemble. Together with noted folklorist Gerry Milnes, she produced a documentary film on West Virginia dance traditions, Reel ‘Em Boys, Reel ‘Em and currently serves part-time as the Events Coordinator for Augusta Heritage Center. Becky organized Dare to be Square West Virginia in 2013, 2014, 2015 & 2017 and Helvetia Hoot in 2019.

In January 2016 she was awarded an additional West Virginia Division of Culture and History Professional Development Grant to study with Sandy Silva in Montreal, Quebec and Yiota Peklari in Athens, Greece in order to deepen her understanding of performing, creating and improvising within percussive dance. Becky served as the Interim Movement Teacher at Linden Waldorf School in Nashville, Tennessee 2017-2018 school year. She performs regularly with the T-Mart Rounders alongside Jesse Milnes and Kevin Chesser. In 2017, she directed and danced in her first full-length music and dance work inspired by Appalachian traditions, Shift and in Fall 2018 she was selected as a fellow for OneBeat, a U.S. State Department Cultural Diplomacy Program.

She has performed at Jacob's Pillow, Newport Folk Festival, Mountain Stage Radio Show, Wheatland Music Festival, Big Ears, Nelsonville Music Festival and many others. As an avid organizer and teacher, Becky's work is deeply rooted in the connections between music and community. She believes there is always more to learn and is dedicated to creating innovative choreography rooted in percussive and vernacular dance. www.rebeccahill.org

It is my purpose as a dance educator to plant seeds of curiosity in the art form of dance. It is my responsibility to meet my students where they are, introducing multiple avenues of investigation in order to incite engagement. My classes aim to connect individuals and communities, and to facilitate self-expression, self-awareness, and understanding. I have experience teaching all ages, and all levels from children to professional.

A space to dance, and leather bottom shoes or shoes with smooth soles.