The Mullins Family: Let Your Light Shine Out 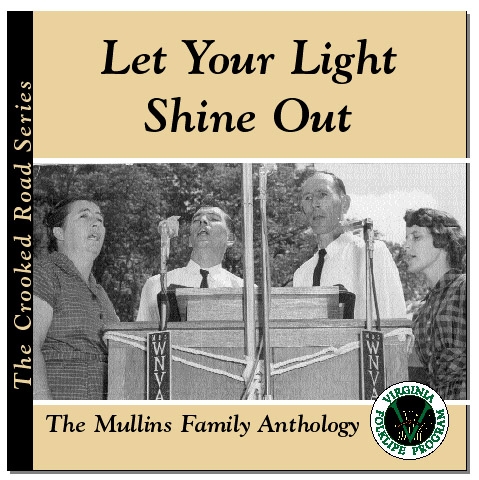 My father, Billy Gene Mullins, was a coal miner and a laborer. He was raised in a lifestyle that consisted of hard labor and sacrifice, on the family farm in the little community called Ghost Rock just a few short miles from the sleepy town of Clintwood.  If you didn’t work, you didn’t eat.  My mother too, was born into that same kind of life.  Her parents were Isabell Edwards Rose and the Reverend Gobel Rose of Clinchco, Virginia.  Grandpa Rose was a long-time millworker, pastor, and minister of the gospel in Dickenson County.

I am happy to declare that there are many things worth remembering about my childhood.  There are lots of memories that have evaporated over time, but the earliest sights and sounds that still ring the most clearly are those of music and singing.  I have come to understand that the love of making music with one’s voice has long been a central part of my family.  I may never know exactly how far back the story goes, but I do know that singing has to be just about as much a part of my being as living and breathing.

The Mullins family has demonstrated a devotion to singing for generations now.  My great-grandfather, Dock Mullins was a song leader in the Cumberland Church of the Brethren.  He taught just about every one of his children to sing, I’m told, around the fireplace in the winter months when the bulk of the family farming work was suspended for a short while.  It was from that family circle that my grandfather, the Reverend Hie A. Mullins, found his own voice to make music.

We’d gather around the fireplace.  Sometimes we’d have one songbook and sometimes we’d sing from memory, and everybody would learn his part.  We sang that way for many years.

My grandfather reminisced about the first time he sang with my grandmother when they were both small children growing up in the church:

Dad was a deacon in the Cumberland church.  I was too small to stand almost, to stand with the congregation.  They placed me up on the roster to sing from there.  My first wife, Frances, she was some younger than me.  She’d sit on one side of the roster and I was on the other side and we sang together then.  She was only four years old when we first began singin’.

Grandfather Hie married my grandmother, Frances Dutton Mullins, (who just happened to come from a singing family of her own) in the spring of 1935.  A short year later, their first son, my father, was born.  It wasn’t too long before he found a place in the family group as well. Dad recollected,

As far back as I remember, there was always some kind of music in the household.  We had a little group together, my Uncle Tony, Dad, and Mom.  Mom played autoharp.  Dad played guitar and I played mandolin.  Tony played guitar too.  We’d go on the weekends down in Kentucky and other places.  We played gospel and country music.

By the early 1940’s, the family could be found singing publicly at pie suppers, local theaters, and community gatherings around the region.  And, by 1946, the ‘Mullins Family Trio’ had established its own Sunday morning radio broadcast on WNVA radio in Norton, Virginia. My grandfather Hie once told me,

Our program caught a lot of attention,everybody that had a radio set was tuned in to that Norton station.  In one week’s time I remember we pulled eighty-nine cards and letters in the mail.

Those early radio broadcasts soon gave the family enough exposure to begin receiving several requests to sing in churches from all over Southwest Virginia, Eastern Kentucky, and East Tennessee.  They also had the opportunity to sing with such musical legends as the Chestnut Grove Quartet, the Stanley Brothers, and even members of the original Carter Family, as well as many other locally-known singing groups of the day.

By 1949, the family had recorded its first and only 78 rpm record, “Cabin On the Hill,” and its B-side, “I Am Free,” at Bristol’s WOPI studios for the Rich-R-Tone label.  As the years passed, the family continued to grow, adding new members to the singing group.  The family went on to release several 45 rpm singles on various private, local labels.  Billy Gene married our dear mother, Myrtle Rose Mullins, on August 24, 1955.  With the addition of Mother, and my aunt Annabell Mullins Puckett, the “Mullins sound” was established for many years afterwards.

Drawing from the rich musical style of singing from both the Brethren and Freewill Baptist traditions, the family has sung at more revivals, funerals, memorial services, and community gatherings than could possibly be documented here. In 1999 Annabell mused,

In fifty years, there’s not many rocks that we haven’t walked over, or many roads that we haven’t been down, the singin’ is the basis of our life.  I believe it would be a terrible punishment if I couldn’t sing.  It is so much a part of me.

The truth in that quote is best demonstrated in Annabell’s unique lead and split lead vocals on a trio of songs included here.  The spiritual “Come and Get Me Jesus,” the title track, “Let Your Light Shine Out,” and the ethereal “Turn Back, Turn Back.”  The last of these three was written by the Reverend Enoch Rose of Dickenson County.

Other notable tracks included in this anthology are “The Snow-Covered Mound,” a song that was at one time so often requested that the family ended up recording four versions of it.  The haunting, “Dream of Mother and Father” along with “A Happy Place For Me,” “Give Them Flowers While They Live,” “How We’ll Sing in the Gloryland” and “ If the End of the World Were Today” all feature the quartet style vocal arrangements that further defined the Mullins family’s very particular sound.

The family, like so many other local groups, often patterned much of its sound from the original Carter Family.  You can hear Carter-inspired guitar and autoharp on “Let Your Light Shine Out,” and the Carters’ influence can also be heard on the tracks “If You Have Friends in Gloryland” and “Lord We Need a Friend Like You,” with its simple guitar and vocal arrangements.

Four family originals- “The Country Just Beyond,” “A Wondrous Place to Rest,” “My Space Craft Journey Home,” and “Take Me Along”- all penned by grandfather Hie Mullins, round out the remaining original vinyl remasters in this collection.

February of 2005 found the current members of the Mullins family sequestered in a studio in Castlewood, Virginia to record new tracks for this collection.  With some impressive musical accompaniment by good friends Mike Mullins on lead and rhythm guitars, Timothy Powers on mandolin, and Greg Stanley on upright bass, the family has embarked on the beginning of a new chapter in the Mullins story.

Six songs from that session have been included in this collection.  The traditional “God Answers My Prayers,” and “Just A Few More Days” are both old time family standards.  “God Is Real” is a song that was lead for many years by Dad, and has now been passed down to his daughter, my sister, Anita Mullins Vanover.  “Amazing Grace, Oh What A Blessing,” an original song my father actually penned in the coal mine, is now nicely led by my brother, Billy Keven Mullins.  Mom sings a beautiful lead on “Just Passing Through,” a tune that has become one of her most requested by many church audiences.  Closing out this set is a new song “The Pilot,” an inspiring tune written by our cousin and long time collaborator Ron Short of Big Stone Gap, VA.

The turning of the 21st century saw the passing of three original members of the Mullins family.  Annabell passed in March 1999, followed by Dad in April, 2000, and then Grandpa Hie in 2001.  And although they will be missed, it is a good thing to know that their spirits are at rest, now abiding in a land of peace. Annabell once said,

We’ve always had music, that was just a part of us.

There’s never been a week- don’t guess a week of my life that singin’ of some sort wasn’t there.  I guess that’s what made our family close. Even as the children came along- and the grandchildren- and the great-grandchildren. It’s still handed down.

How will the next chapter of the Mullins story unfold?  As long as there is a family and singing, the outlook remains hopeful.