The Earl of Indian Valley 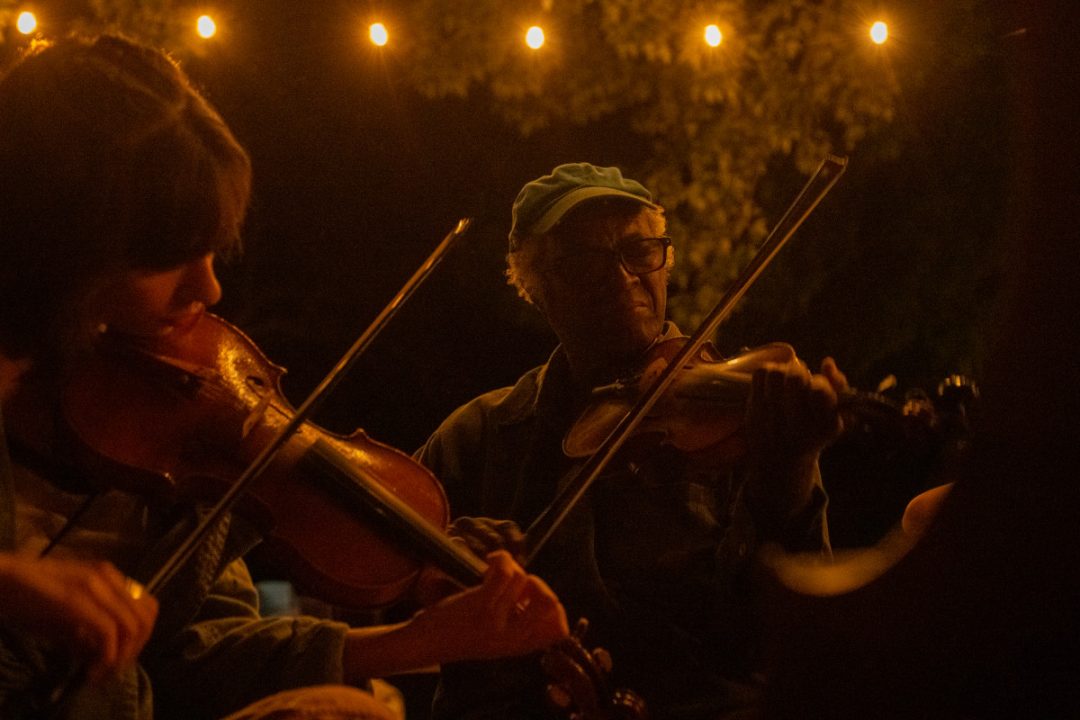 “Ring the dinner bell,” Earl White instructed me quietly as he worked a griddle full of breakfast sausage. I grabbed the iron triangle and let out the call for breakfast. It was the Saturday morning of the eighth annual Fiddlers’ Jam at Big Indian Farm, in Floyd County’s Indian Valley. White told me I had to ring the bell three times so that the sound of the clanging triangle would reach the campers almost half a mile away down at the creek bottom.

I hung up the triangle and looked behind me at the scores of musicians who had lined up for breakfast. I started to worry that White didn’t cook enough sausage. “Health is wealth,” is their motto at his music gatherings, he told me. A big part of that is local, well-prepared food for all the musicians that White and Adrienne Davis host at Big Indian Farm. The Fiddlers’ Jam has been drawing hundreds to White and Davis’s farm for the last eight years. It’s known as a place to get together with friends, eat food and jam. It has a good reputation among those who are invited.

Building on the spirit of Fiddler’s Jam, White held the first Big Indian Music Camp this past June. “We’re all brothers and sisters,” said White, “and we’re human and we can all sit at the same table.” This is true for the common food but also the formally informal style of teaching he and the instructors employ at the old-time music camp.

By day, instructors Danny Knicely, Mark Schatz, Vic Furtado, and Eli Wildman lead intensive sessions with students. The teachers and students camp together, eat meals together and jam together in the evenings. The students are given opportunities to learn by participation. It’s part of Earl’s vision for instruction. “We can sit around and perform, but why not bring these people into it and develop that level of comfort?” asked Earl. 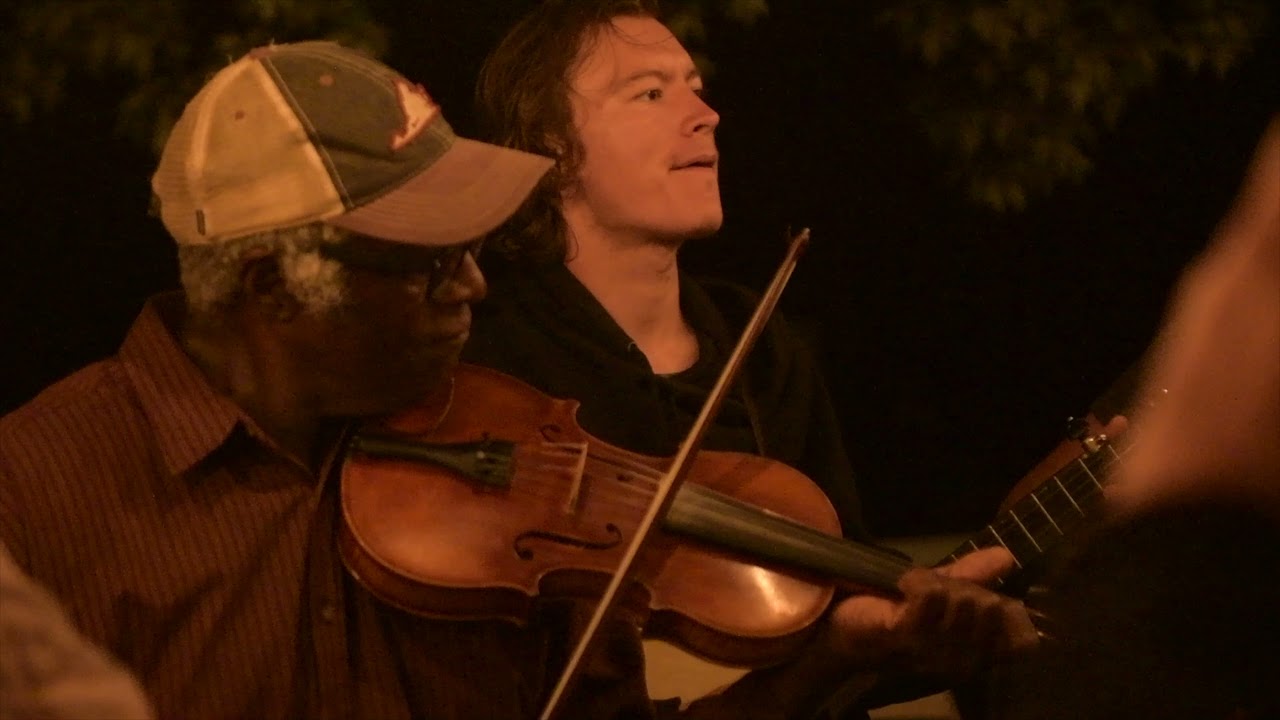 White and Davis moved here from California in 2016, in part to realize a dream he had back when he was touring the world with the Green Grass Cloggers of creating some sort of “old folks’ home” for the aging dancers. White founded the clogging group along with the late Dudley Culp while they were studying at East Carolina University in the 1970s.

Culp first saw clogging at the Union Grove Fiddlers’ Convention in the spring of 1971. He learned some basic steps from Evelyn Smith Farmer from Fries, Virginia, that he took back with him to his housemates in Greenville. White said they started off having jams around the house with no music, just dancing, a laughable situation for almost any dancer practicing this style.

It was a chance meeting at the Galax Old Fiddlers’ Convention that led White to befriend Tommy Jarrell, an old-time musician who was awarded the National Endowment for the Arts’ National Heritage Fellowship in 1982 from the Round Peak community of North Carolina. According to White, it was an “instant marriage between the Green Grass Cloggers and old-time music.” The Green Grass Cloggers danced all over the world, sharing stages with acts like Jefferson Airplane, Seals and Crofts, and Alice Cooper. This meeting with Jarrell also influenced White, who grew up in New Jersey and first recognized his love of mountain music from a Mountain Dew radio jingle.

White met Thompson backstage at a concert once, and when Thompson laid eyes on him, White said the elder fiddler looked like he’d “seen a ghost.” He told White that he didn’t know there were any other living Black fiddlers on the planet.

Another time while performing with the Green Grass Cloggers, White had a conversation with the man credited with inventing the bluegrass genre, Bill Monroe. He told White that he reminded him of a fiddler he used to perform with. Monroe never mentioned a name, but Earl thought about it and realized that he probably reminded Monroe of another Black fiddler, Arnold Schultz. Schultz was the innovator of a particular thumb-style of playing guitar and was responsible for getting Monroe his first paying gig, said White. But, like many museum

displays and textbook images, the Black musician was not named by Monroe that day. This erasure of Black influence and performance in the old-time and bluegrass communities mirrors the erasure of the African roots of the banjo through minstrelsy in the eighteenth and nineteenth centuries.

According to White, the erasure of Black influence from mainstream American music has caused some Black folks to develop an aversion to this music. At one point Earl was busking on the streets of Santa Cruz, California, with his wife and son when a Black couple approached on the sidewalk. “They were an older couple, and as they were approaching it appeared to me that they were deliberately looking away or looking down.” They passed the musicians and avoided contact. White finished the song and caught up with them to ask about avoiding the music. “It reminded them of a time way back in their past,” said White, “so to hear it at present times brought back those memories and these were memories they were casting aside.”

The truth, says White, is that old-time music belongs to Black people as much as it belongs to white people. “Old-time music is not a Black music, it’s not a white music. The downfall is that a lot of the Black community have had no representation or have not been given credit for the music.” 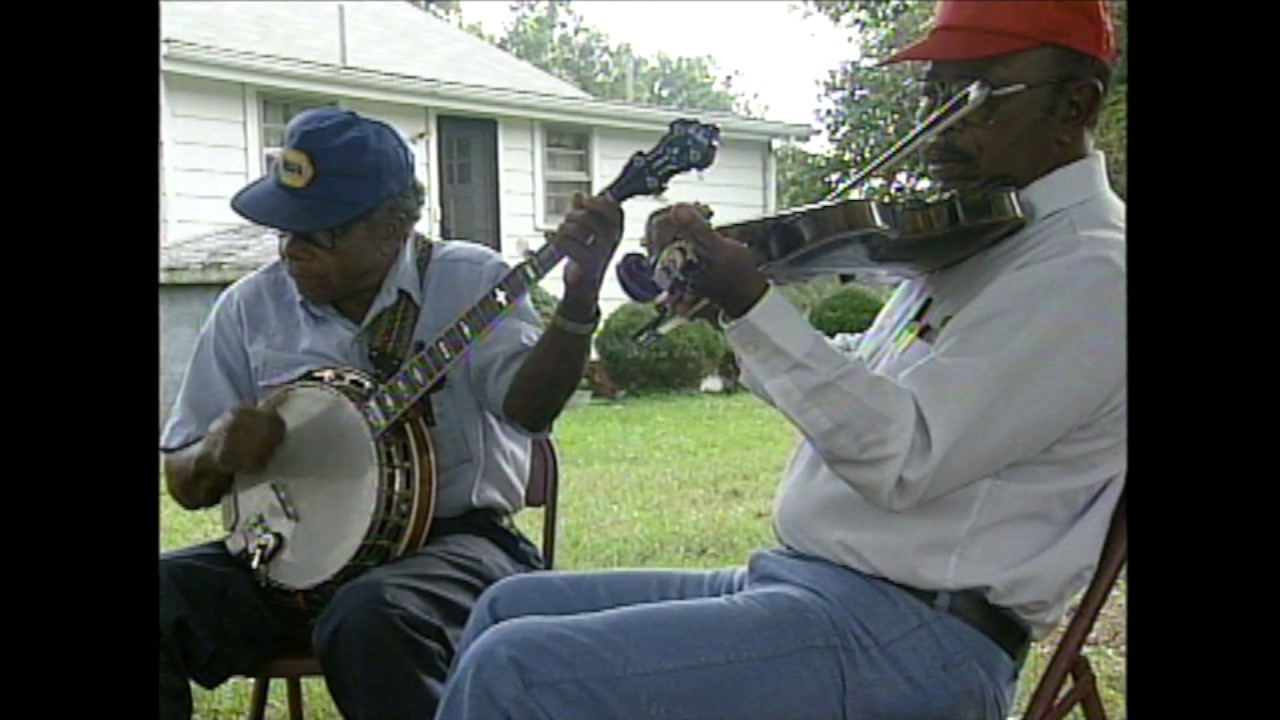 On the last morning of White’s camp, he was spreading out sheets of paper from a yellow legal pad with song names written on them with the key signature noted. Once, he tried to write down all the songs he knew by heart, but stopped at around 500, the list far from complete. His repository makes up the repertoire that’s drawn upon every night at camp, when White leads jams that last into the wee hours of the morning. This is part of the curriculum, White’s formally informal style of passing along songs by ear.

Instructor Eli Wildman of the old-time group The Wildmans said that this style of instruction has worked for him in the past. “A big part of how I learn is playing with these people, jamming,” said Wildman. “Earl (White), he’s pulling out a tune we’ve never heard before. The whole time we’re jamming we’re learning from him.”

Wildman’s bandmate and 2019 Steve Martin Banjo Prize winner Vic Furtado says that he appreciates the “cool funky tunes that are kind of rare” that White brings to the jams. They’ve been working together since White met them at the Junior Appalachian Musicians program, a nonprofit afterschool music program for grades four through eight that works with more than fifty schools in Virginia, North Carolina, and South Carolina. Furtado remembers White handing him a thumb drive containing around a hundred field recordings for Furtado to learn.

After the sun set one evening the students and instructors paused for chocolate cookies that Davis had brought from the bakery, still warm from the oven. The break gave students time to ask specific questions and instructors opportunities to crack some pretty bad jokes. This was the informal education in action, and I assume it was similar to how White and Jarrell met at the Galax Old Fiddlers’ Convention. After all, this music is community-based, and there’s no community without connections like this.