Nat Reese: Save A Seat for Me 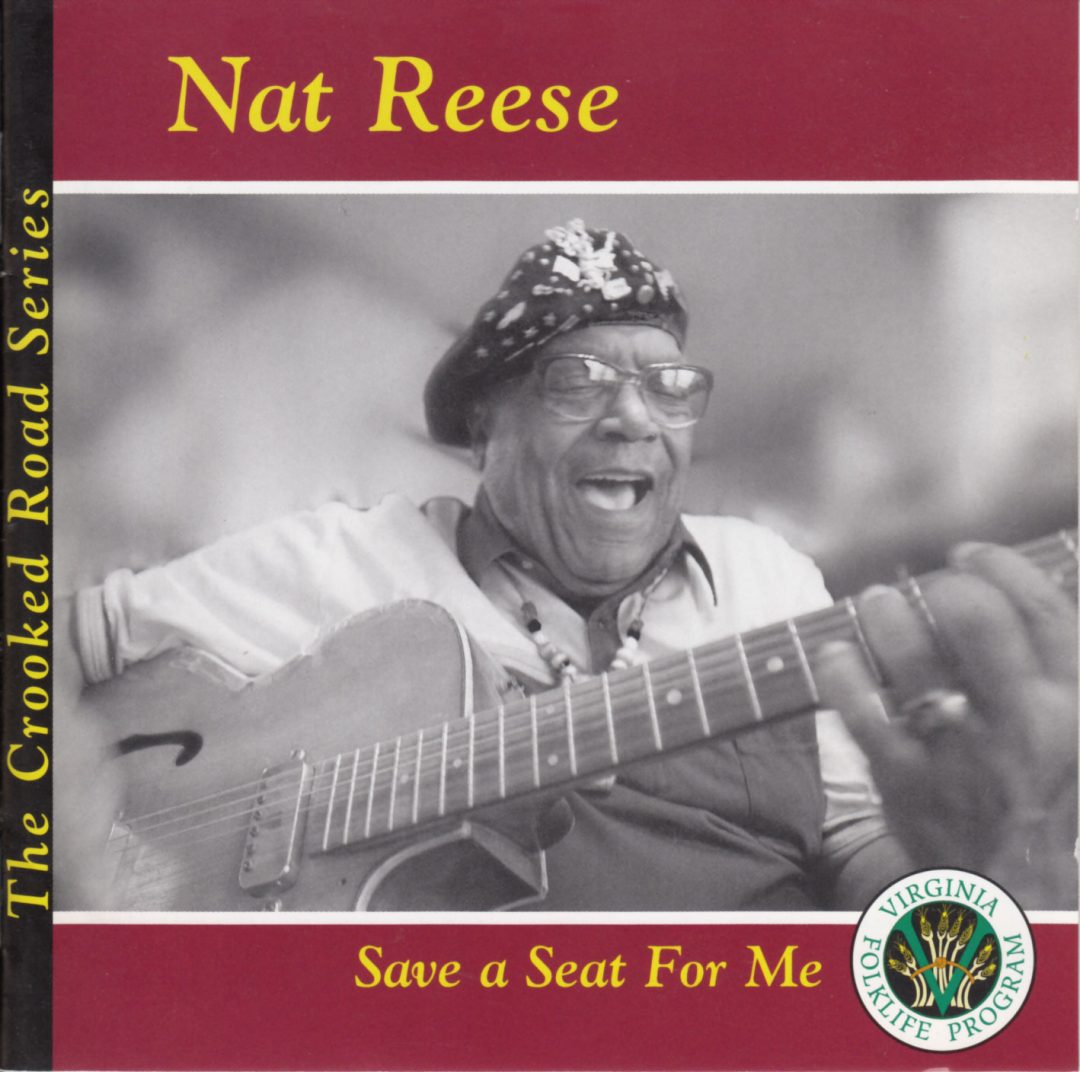 Save a Seat for Me Album Cover Property of VFH

Nathaniel Hawthorne “Nat” Reese was born March 4, 1924 in Salem, Virginia to Thomas Walker Reese and Rosa Sylvester Caroline Wilson Reese. Thomas was originally from Montgomery, Alabama, and Rosa from Bessemer, Alabama. The family had previously lived in Florida and Georgia before coming to Virginia to, as Nat puts it, “get away from the cotton fields.”  In Salem, the Reeses lived on Water Street while his father drove a truck for a coal and ice company by day, and operated a small store, covering the evening shift every night until 8pm.  Rosa kept a cow and sold milk and butter at the family’s store. Both parents were musical, Nat’s father played guitar and his mother the concertina. Nat recalls learning “Life Is Like a Mountain Railroad” at his mother’s knee.

One Sunday after church, a visiting preacher told Nat’s father that there was plenty of money to be made in the coal fields of West Virginia. After an exploratory trip, the family moved to Itman, in Wyoming County, West Virginia when Nat was five.  Thomas took a job at the shop of the Virginian Railroad for $2.64 a day, a position he held for 30 years.  Nat began to show musical talent on his father’s guitar, so, on time payments, Thomas bought him a Martin Tiple – a 12-string instrument of Argentine origin popular at the time — and Nat quickly developed real proficiency.

Nat began to learn songs from itinerant black musicians who rode the rails throughout the mountain coal camps, company towns that were divided into “colored,” white, and Italian sections.  If a worker was killed in the mines or on the railroad, the company would allow his widow to remain in company housing and operate it as a business to compensate for the loss of the spouse’s income.  Food was served in these places, moonshine could be had, and these traveling musicians entertained there on Friday and Saturday nights.  It was at these rowdy “juke joints” that young Nat was exposed to the blues, and conversely to country music at similar establishments frequented by whites – “honky-tonks” — since the itinerant musicians played both black and white venues and developed repertoires tailored for both audiences.

When Nat was nine, a train engineer told Thomas he had heard that Nat could play, and asked if he might be willing to perform at a local school for the then princely sum of six dollars.  Nat’s parents talked it over in front of Nat that night at the supper table.  “Ask the boy,” his mother suggested.  “Yeah! It don’t make me no difference!” was Nat’s reply, “I’ll play anywhere! Railroad, riverbank, on the train, off the train, don’t make no difference!”  This engagement led to a long string of performances at coal camps in the region such as Black Bottom, Fireco, Pineville, Welch, and others, usually as the warm-up entertainment at speaking engagements given by visiting executives of the coal companies. Nat sang songs he had learned from the itinerant coal camp musicians, his parents, radio broadcasts, and from 78rpm records played on the family’s spring-wound Victrola, such as “The Preacher and the Bear”, “Corrina, Corrina”, and “My Blue Heaven.”

About the same time, Nat took to sitting on the railroad track in front of a house where a gospel quartet comprised of miners and railroad workers gathered to practice.  When one of the vocalists was killed in the mine, young Nat was asked to join since he possessed a fine high-tenor voice, and already knew all their songs from listening in.  The three adult members assured Nat’s parents they would be responsible for their “little brother” when the group traveled the region. About the time Nat’s voice began to change, Edward Buford, the leader of the Kings of Harmony Gospel Quartet, moved from Alabama to Slab Fork, east of Beckley, and gave Nat his first formal singing instruction, greatly improving Nat’s skill as a gospel quartet singer.

In 1939, at the urging of Reverend McClure of Itman, Nat joined his brother Thomas, and John and Walter Mozelle to form the Harmonizing Four Gospel Quartet.  This group toured throughout the region traveling to Nashville, Knoxville, North Carolina, Alabama, Georgia, and Mississippi. Nat recalls that the group assiduously avoided South Carolina because of the intense racism there at the time: “Gospel (singing) was a form of therapy (against) a sick body of men. You had to have somethin’ to believe in. What you can’t change, you try to outlive it.” The quartet would typically appear on the radio in a town early in the morning, and then visit several churches in the afternoon and evening.  Nat remembers these churches as being so full “there was people cryin’ shoutin’ praisin’ God . . . peepin’ in the windows!”  And wistfully adds, “Those were some times.”  Poor congregations would put food in the collection in lieu of money, and the quartet would often trade donated food for gasoline.  The Harmonizing Four were contemporaries and friends of such notable groups as the Golden Gate Quartet, and the original Fairfield Four.  Nat also met a minister’s daughter, Bessie Smith, and the two were married by a white preacher, Reverend Jones – not the Reverend Jones that appears in “I Ain’t Gonna Throw It Away” Nat assures us! Nat and Bessie were blessed with three boys and a girl, and adopted a child in 48 years of marriage before Bessie passed away in 1996.

Nat always showed promise in visual arts as well, and he enrolled in commercial art classes at Bluefield State College.  It was then that Nat began to play his blues in more secular venues, sometimes playing behind chicken wire.  At one such engagement, Nat noticed two men in front of the stage arguing over a woman.  Nat heard a loud bang and looked down to see a hole in the front of his guitar.  He pushed the guitar forward to inspect the instrument and found a splintered hole as big as a golf ball on the backside, and blood on his shirt.  Nat checked himself to discover he had only been grazed, but quickly left the establishment telling the manager, “John more, Bill more, Jack more . . . but I ain’t playing here no more!”  In 1939, Nat first met and performed with multi-instrumentalist Howard Armstrong, who was traveling through and playing the coal camp circuit from his home in Tennessee. The duo was to perform together with increasing regularity over the next sixty-five years until Armstrong’s death in 2003.

The Harmonizing Four disbanded for World War II when Nat served in the Army and regrouped following the war.  In 1948, Nat went north to take advantage of the post-war boom and worked for Bethlehem Steel in Lackawanna, New York for four years, before settling in Mt. Clemens, Michigan where he drove an excavator for a construction company and exercised his natural artistic talent as a sign painter.  During these years, Nat’s new gospel quartet – the Heavenly Gospel Singers — participated annually at the Gospel Contest held in Detroit and frequently won 2nd or 3rd place.  The Reese home was a popular gathering spot for gospel singers from all over the country, and Nat met and befriended the legendary gospel composer Thomas A. Dorsey of Chicago.

In 1961, Nat and his family returned to Princeton, West Virginia. Nat went to work in local industry and repaired radios and television sets as a sideline. He also began to perform regularly as a duo with Howard Armstrong and the pair toured Europe in 1959, 1961, 1962, 1963, and again in 1980 performing in Switzerland, Belgium, France, and behind the Iron Curtain in East Germany. Since his retirement, Nat remains musically active, performing at festivals and as a guest instructor at universities throughout the US, and is a gifted painter.