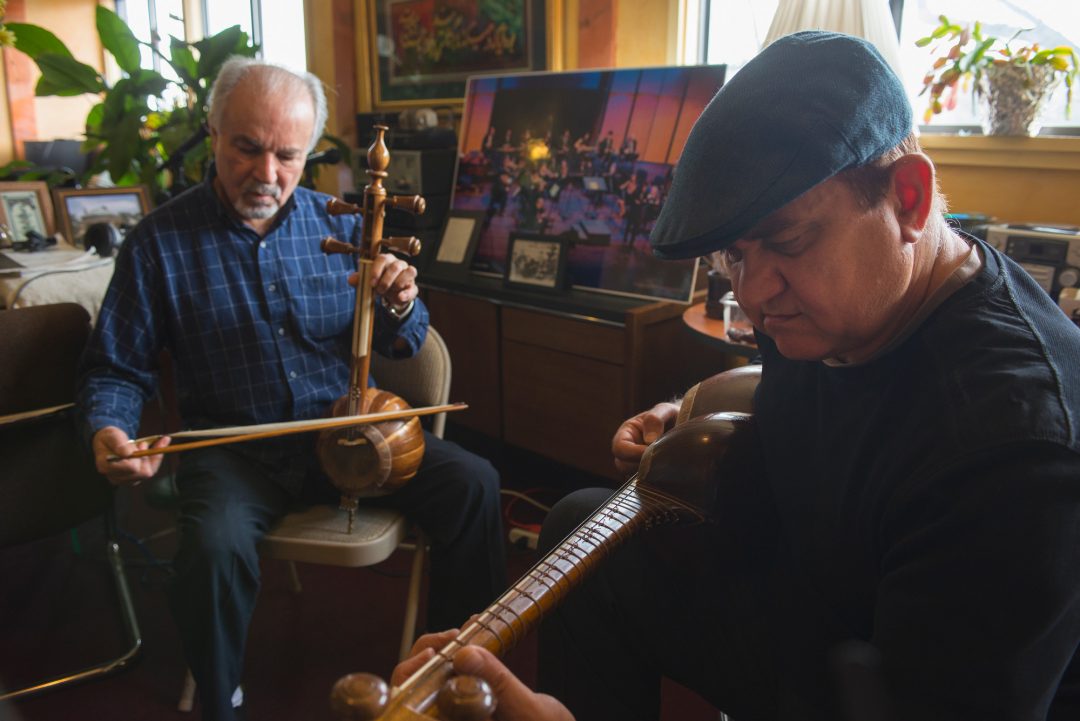 Ali Reza Analouei is apprenticing under Dr. Nader Majd in the performance of classical Iranian and Persian music. The pair photographed at the Center for Persian Classical Music in Vienna, Virginia on 4/4/18. Photo by Pat Jarrett/Virginia Humanities

Dr. Nader Majd was born in Sari, Iran, and began studying and playing the santur, or Persian hammered dulcimer, and violin at the age of six. He later learned to play the tar and setar—both plucked instruments—from his father and uncles, artists well known in Iran. All of these instruments are essential to Persian music of prayer. Dr. Majd immigrated to the United States in 1968, establishing the Center for Persian Classical Music (CPCM) in Northern Virginia in 1997 to “make Persian Classical music known to our American friends, as a means to increase understanding between our two countries.” The CPCM employs the universal language of music as a tool for communication and cultural exchange. Nader is a returning master artist in the Apprenticeship Program, once again working with Ali Reza Analouei, who himself was a 2009 Master Artist on the Tombak and Daf, pre-Islamic drums of Persia. The timing of Nader and Ali’s return to the Apprenticeship Program is particularly significant, as Nader wrote in his program application: “Considering that we are living in these sensitive times, given the strain on political relations between Iran and the U.S. and the current immigration situation and ban against travel to certain countries in the Middle East, much of the culture will not be transferred and preserved through travel. The only way to preserve and perpetuate our cultural and heritage values is through current residents such as myself and Dr. Analouei who have devoted our lives in preservation and promotion of our culture and heritage in the Northern Virginia Community.”