Mongolian Contortion: The Art of Bending 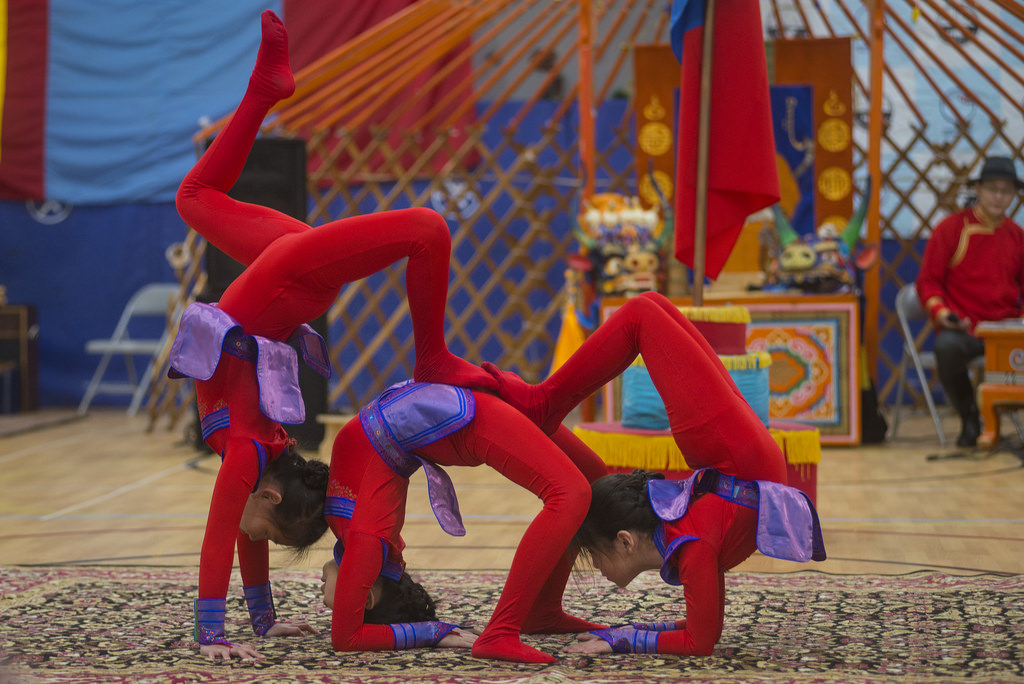 Mongolian contortion has existed since the 12th century as a dance called Uran Nugaralt, which translates to artistic bending. Photo by Pat Jarrett/Virginia Folklife Program

Many of the traditions on display at the Virginia Folklife Apprenticeship Showcase date back centuries in Virginia, but others are deeply established art forms that are new to this country, brought here by recently arrived immigrant communities in the rapidly changing cultural landscape of Virginia.

One such tradition is Mongolian contortion, which has existed since the 12th century as a dance called Uran Nugaralt, which translates to artistic bending. This kind of dance was prominent in the royal palaces of Mongolia before it became associated with the international success of the Mongolian State Circus in the 1940s. To this day, Mongolian contortionists are known around the world for their mastery in the field.

Approximately 8,000 immigrants from Mongolia live in the D.C. area, mostly in Arlington. Immigration began in the 1990s, after the fall of the Soviet Union, as Mongolians searched for economic opportunity. The strong educational system of Arlington County parallels the cohesive education offered in Mongolia, and children from Mongolia have been adapting extremely well to the new environment.

One of those immigrants is Mandkhai Erdembat, who was born in Ulaanbaatar, Mongolia. As a child, she frequently visited the circus with her grandmother, Dolgorjav. Contortion training is highly respected in Mongolia, and Dolgorjav took Mandkhai to her first contortion classes when she was five years old. Traditionally, training begins before the age of eight to achieve the necessary flexibility. Mandkhai later traveled across the globe to perform contortion on cruise ships, at festivals, and as part of dinner shows before moving to the United States in 2012.

Mandkhai’s beloved coach, Norrjmaa, played an important role in her personal and professional development. She was a tough teacher who pushed Mandkhai to reach her potential. Mandkhai confesses that “there is no contortionist who has not cried.” It is not an easy art to learn and requires serious dedication. Some people, she says, give up too soon. Her love of contortion and support from her family helped her to accomplish her goals. When Norrjmaa passed away, Mandkhai decided to teach because Norrjmaa had shared so much with her and she felt she needed to do the same.

Mandkhai moved to Northern Virginia two years ago to open her school. Ella and Emma Chuluunbat, twin sisters from Mongolia, are two of Mandkhai’s first students. They are joining her as apprentices in the Folklife Apprenticeship Program and are very excited to be the stars of the latest episode of Mandkhai’s show, Contortionist’s Seed, on Fairfax Public Television. Mandkhai takes pride in teaching them how to be contortionists as well as courteous members of their community. She hopes to open a nonprofit organization to teach future students how to be happy, healthy, and financially independent along with their contortion training.

In February, Folklife Program photographer Pat Jarrett captured Ella and Emma Chuluunbat and a third student performing at Patrick Henry Elementary School in Arlington, Virginia, under the watchful eye of Mandkhai for the Tsagaan Sar Mongolian New Year of the Earth Dog celebration.