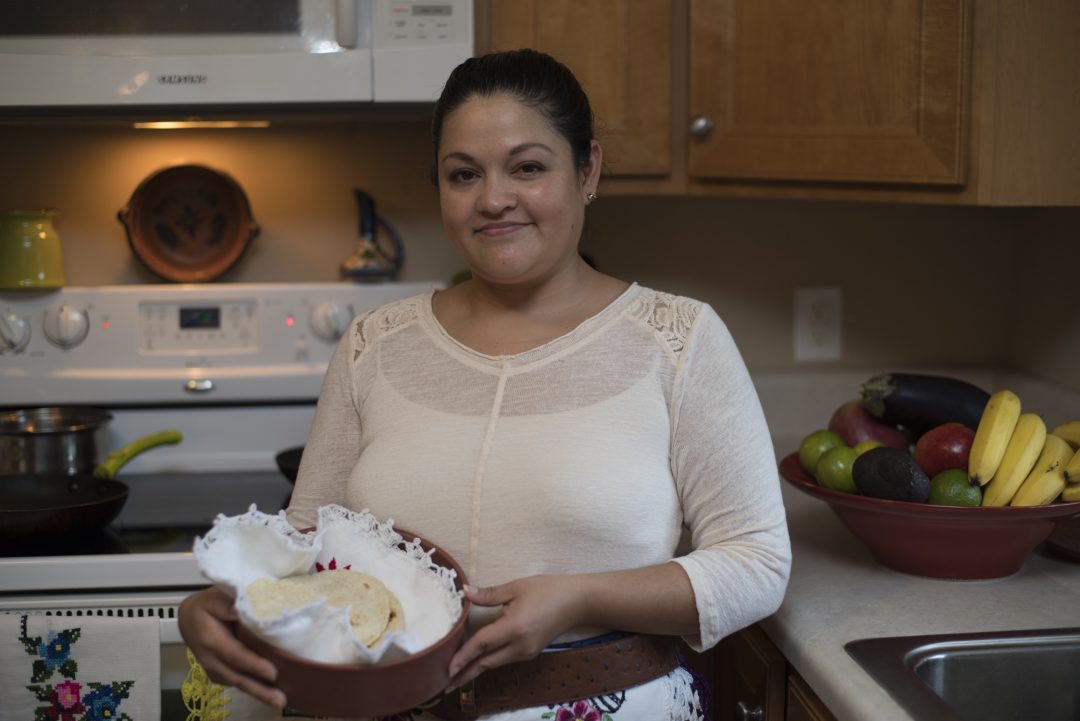 In the town of Morocoy, where Luz Lopez was raised, there is a large plaza where people go to relax at the end of the day. Several women in town have stalls set up in the plaza to sell food and snacks to these evening crowds, and Luz’s mother, Victoria Lopez, was one of them, specializing in dishes from her northern hometown of Michoacán. Victoria and her family had moved to southern Morocoy as part of a government initiative to populate the region. Most of the residents come from different areas of Mexico and have made Morocoy a crossroads of regional Mexican foods and traditions.

Luz, like other daughters of the plaza cooks, learned her mother’s recipes as she helped to prepare them. The first task she learned to master was the preparation of the chiles and removal of their seeds. Together, Luz and her mother would make tamales, enchiladas, tacos dorados, tacos al pastor, and morisqueta, among other dishes. One of her mother’s classic dishes was menudo, a spicy tripe stew. Upon moving to Morocoy, Victoria started referring to it by the southern name of mondongo and added a bright red condiment from the south called achiote to the broth. The addition of achiote became her trade secret and gained her praise and recognition from the other Michoacán cooks who were unfamiliar with it.

In addition to preparation of the daily evening refreshments, many of the plaza cooks were hired to cater the food for large gatherings and festivities. Barbacoa, a pit-cooked beef dish which is the origin of the word “barbecue,” is among the favored celebratory meals from Michoacán. In towns where barbacoa is consumed, there are usually a few residents known for their mastery of its preparation. Their skill lies not only in making great food but also in directing the whole town to execute this meal. Luz assisted her mother in creating countless barbacoas for their town.

Making a barbacoa requires first marinating the meat overnight in a blend of chilis and spices. A large hole is then dug into the ground and heated. The meat, usually from a cow or goat, is wrapped in maguey leaves and placed inside the hole, buried, and cooked for many hours. Maguey is a plant from the agave family that lends a particular flavor to the meat, as well as trapping moisture to create a steaming effect. The resulting meat is tender and juicy, falling apart as you place it inside a tortilla. It is generally served with diced onions, cilantro, salsa (guacamole, chile picante, salsa verde, or salsa roja), lime, and sometimes rice and beans.

When Luz moved to Virginia she rekindled a Morocoy romance and married her childhood sweetheart, Artemio Reyes. For Luz’s wedding in Virginia her family and friends prepared the barbacoa from a whole cow they purchased for the occasion. Throughout the weeklong festivities numerous hands chipped in to separate the different cuts under the guidance of her sister who, like many people from their hometown, is capable of butchering an entire cow. Cuts were used to make enchiladas, cecinas, milanesas, and other meals for the large crowd gathered in preparation for the wedding.

Luz’s favorite way to make barbacoa is with the head of a cow. This preparation demands a laborious deep cleaning of the whole head and tongue before marinating and cooking. It is a process she goes through about twice a year for the holidays. Sometimes the head has too much bone and not enough meat, so she adds other cuts. The tongue, she says, is usually the meatiest part of the head. The eyes and brains are coveted by some aficionados and avoided by others. Sourcing cow heads in Virginia has not always been easy, but she found a meat packer that would almost give them away due to lack of demand. These days, their popularity has increased and the heads are available for purchase, although at a higher price.

In Virginia, Luz cooks her barbacoa in a vaporera, a type of steam pot. A modern take on the preparation of barbacoa, it is a technique often used in Mexico. The meat is placed inside the steam pot and slowly cooked in the oven, recreating the more laboriously-achieved effect of tender, fall-apart meat. It’s a technique she is teaching to her daughters, Princey and Vanessa, who are learning to help her in the kitchen. They have already mastered the preparation of chiles and tortillas. Luz often asks her children and husband to contribute to the composition of meals by making the tortillas. She explains that fresh tortillas are essential to Mexican cuisine: “with homemade tortillas even the simplest combinations are delicious.”

Today in Morocoy, many of the daughters of earlier plaza cooks continue to run the daily food stalls. Luz wants to begin writing down all of the recipes she learned from her mother to ensure that they are passed down to Princey and Vanessa, since preserving the foodways of her youth is an important way to teach her daughters about their Mexican heritage.

Witness and taste Luz Lopez’s at the Richmond Folk Festival.