Ethiopia is the birthplace of coffee, and Ethiopian beans are arguably some of the best in the world. As legend has it, coffee was first discovered by goats on the Ethiopian plateau. A herder named Kaldi noticed that his goats were jumping around excitedly and couldn’t get to sleep after eating the fruit of a certain tree. The tree was identified and soon monks in a nearby monastery were eating the fruit to stay alert during prayers. 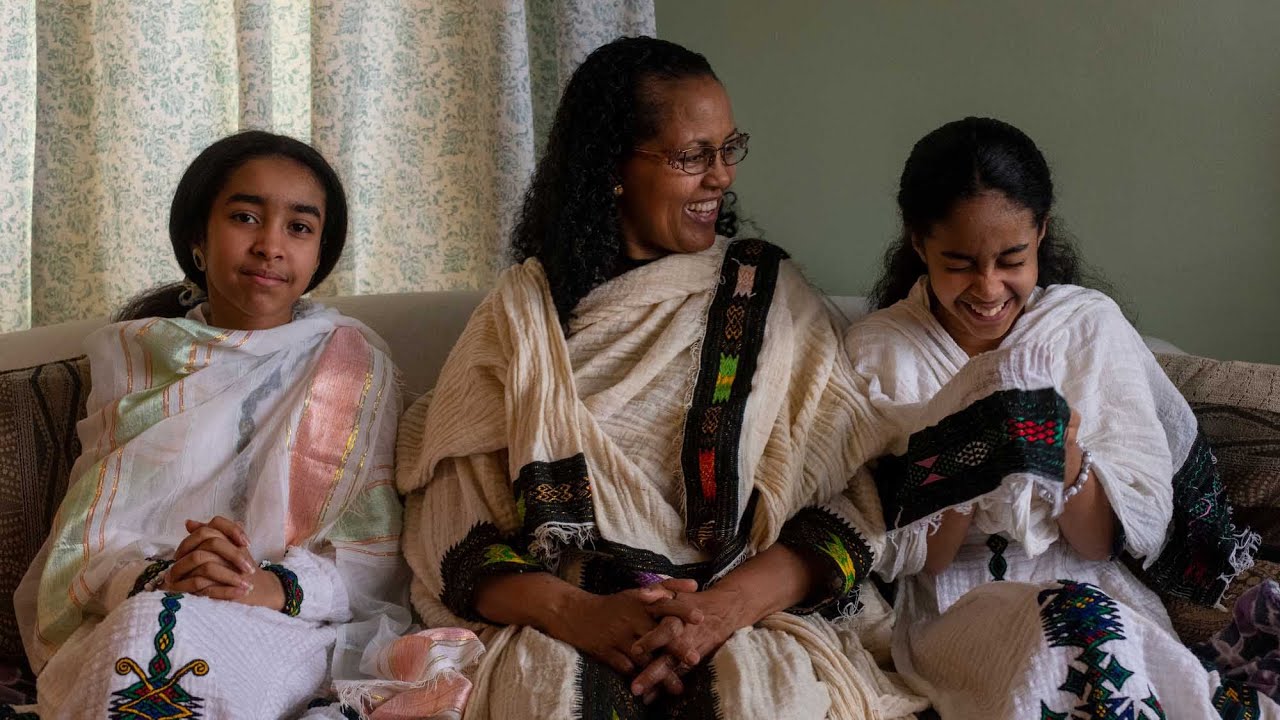 Traditional Ethiopian coffee ceremonies are focal points for making connections with friends and loved ones. It’s not a small undertaking, with three servings of coffee paired with popcorn, barley and other baked goods after a multi-course lunch or dinner. It’s a time to discuss family issues, share thoughts and foster deep connections. Problems are solved over coffee.

“In Ethiopia, tea is just tea,” said Seyoum Berhe during a recent coffee ceremony at his Richmond home. “But coffee is never a drink. Coffee is a means to resolving whatever is going on. People who have been enemies for a long time will resolve their dispute.” He said family feuds and even wars have been settled over coffee. Tea is just a hot beverage, but coffee means much more than that. “Coffee is not only coffee,” added his wife Lemlem Gebray, who is apprenticing her twin daughters Datta and Akeza Seyoum in the tradition.

Gebray typically hosts her family and friends for coffee on Sundays, after church. Her girls help get the materials together for the ceremony. She explains that she and Seyoum like to make Sundays a day of rest and togetherness.

While Datta and Akeza were born in America, they love and celebrate their Ethiopian culture and heritage. Before the pandemic, they would regularly travel to Ethiopia to visit family with their parents. The twin girls are learning the Saho language from their parents, too. “I think the most important part of going to Ethiopia is touching the Ethiopian place we all love,” said Akeza.

The traditional Ethiopian coffee ceremony starts with the eldest male in the room giving a blessing to the beans. “May the lord bless you, may we have rain, may our rivers be flowing with music, may we have a good king, we don’t have kings anymore,” Berhe said to the green, unroasted beans as he started the ceremony. Berhe then handed the beans to his wife to make the coffee. Gebray roasted the beans over a stove, filling the air with aromatics before brewing coffee over an open flame in the serving vessel, called jebena in Tigrigna or zabanit in the Saho language. (Ethiopia has five official languages and upwards of 80 spoken today by its many ethnic groups.)

After the coffee is infused, and milk and sugar preferences are confirmed, Gebray poured the steaming liquid into 12 small cups, representing the 12 apostles to Jesus Christ. The cups are arranged on a low table, called rokobet in Tigrigna and akahu bun in Saho. The girls help serve snacks as conversation rose in the room along with the incense smoke.

One never partakes in just one round of coffee at a ceremony. It is tradition to serve three rounds, explains Gebray. “The first is the good one, the second one is a little better, the third one is a blessing, signifying good luck.” In Saho these are known as Sedali, Malama and Madaha and in the Tigrigna language it’s Awel, Kalay and Salisay.

Ethiopia is currently experiencing a genocide, though it is rarely covered by the US media. In April, Amnesty International and Human Rights Watch declared the persecution of Tigrayans by Amhara paramilitary groups an act of “ethnic cleansing.” The greater Washington, DC, area is home to the largest population of Ethiopians outside of the country—an estimated 30,000 reside in Virginia. As tragedy unfolds at home, the peaceful aspirations and possibilities of the Ethiopian coffee ceremony are even more poignant.

“Coffee is never a drink. Coffee is a means to resolving whatever is going on. People who have been enemies for a long time will resolve their dispute.”