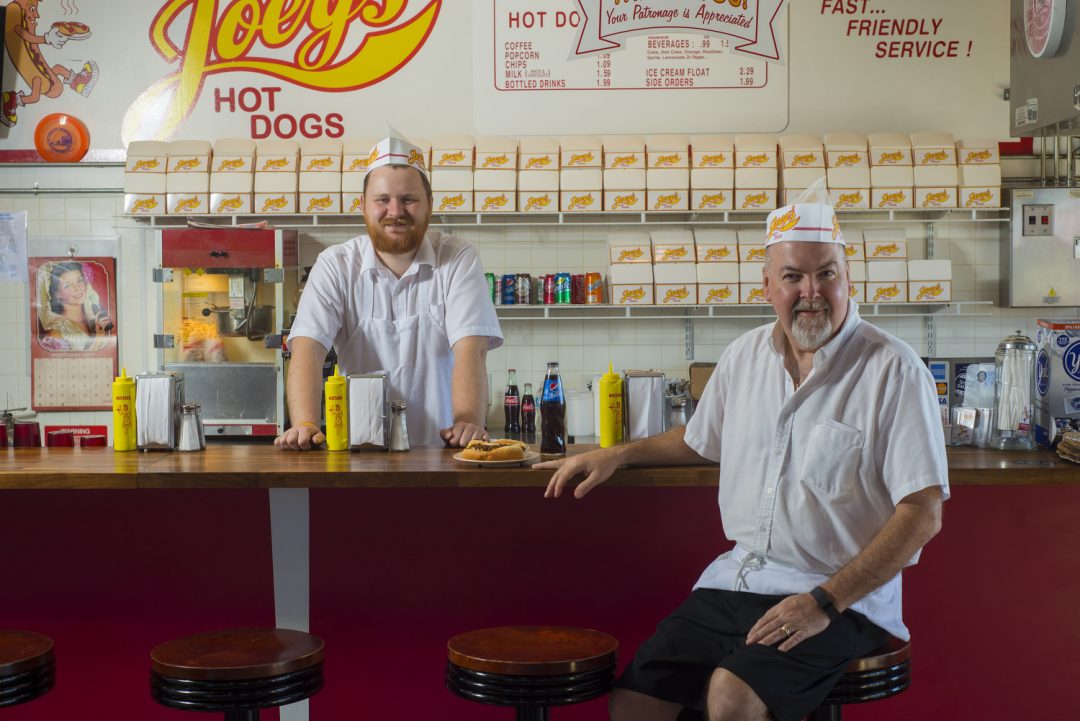 Joey Mirabile and his apprentice Logan Caine serve the same kind of hot dogs Joey's father Tony made famous at his hot dog shop in Norfolk starting in the 1930s.

Joey’s Hot Dogs, in Richmond’s West End, is for many the pinnacle of what is one of America’s iconic foods. Joey Mirabile has hot dogs in his blood. His father, Tony, started serving hot dogs at age fourteen at the start of World War II in 1939, when he worked for Bacali’s Hot Dogs in Norfolk. Known to many as “The Hot Dog Boy,” Tony often sold hot dogs to celebrities such as Frank Sinatra and Sammy Davis, Jr., when they came to perform and stay at Virginia Beach’s first resort hotel, the Cavalier Inn. His mother, Geri, had worked at the soda fountain at the nearby People’s Drug Store. Tony and Geri married in 1950, and in 1962, Geri opened Tony’s Hot Dogs in Norfolk. Initially, she also served hamburgers and root beer floats, but when Tony took over running the business a couple of years later, he scaled back to just hot dogs with mustard, onions, and chili—no ketchup or chips allowed. In 1969, they opened a second store in Virginia Beach, which soon became a prominent fixture in the Beach’s culinary landscape. Joey carries on the tradition, using the same chili recipe his dad served back in the 1930s. He also hosts occasional hot dog eating contests, which is fitting as Virginia is home to one of the competitive eating circle’s greatest stars, the diminutive Sonya “Black Widow” Thomas of Alexandria, Virginia. Joey plans to keep the family hot dog business and legacy alive by apprenticing Logan Caine.