Jason Rutledge and Melanie Carrier and Adam B. Greene 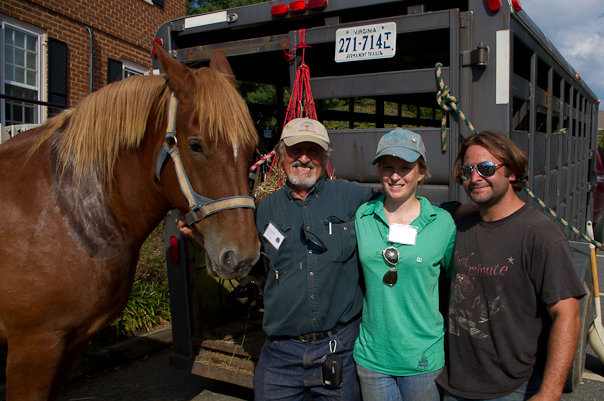 Melanie Carrier and Adam B. Greene

Born to a sharecropper’s daughter on tobacco row in Southside Virginia, Jason Rutledge was educated in the traditional skills of Suffolk horse drawn logging by his grandfather, a man skilled in working with horses, mules, and oxen. The family raised tobacco crops for sale, moving from farm to farm during Rutledge’s childhood in the 1950s. By the latter part of the twentieth century, horses and other pulling animals had been replaced by machines almost entirely. This change occurred more slowly in the mountains, as the danger of operating machinery on steep slopes limited its effectiveness over traditional animal power. Today the use of animals for forestry is an environmentally sensitive alternative to machine based logging. Rutledge’s apprentices, Melanie Carrier and Adam Greene, have learned responsible forest management practices and animal handling through the Biological Woodsmen program at Rutledge’s Healing Harvest Forest Foundation, established to teach the skills and ethics of restorative forestry, and to educate the public about its benefits as a living link between heritage-based cultural practices and contemporary concern for the environment.