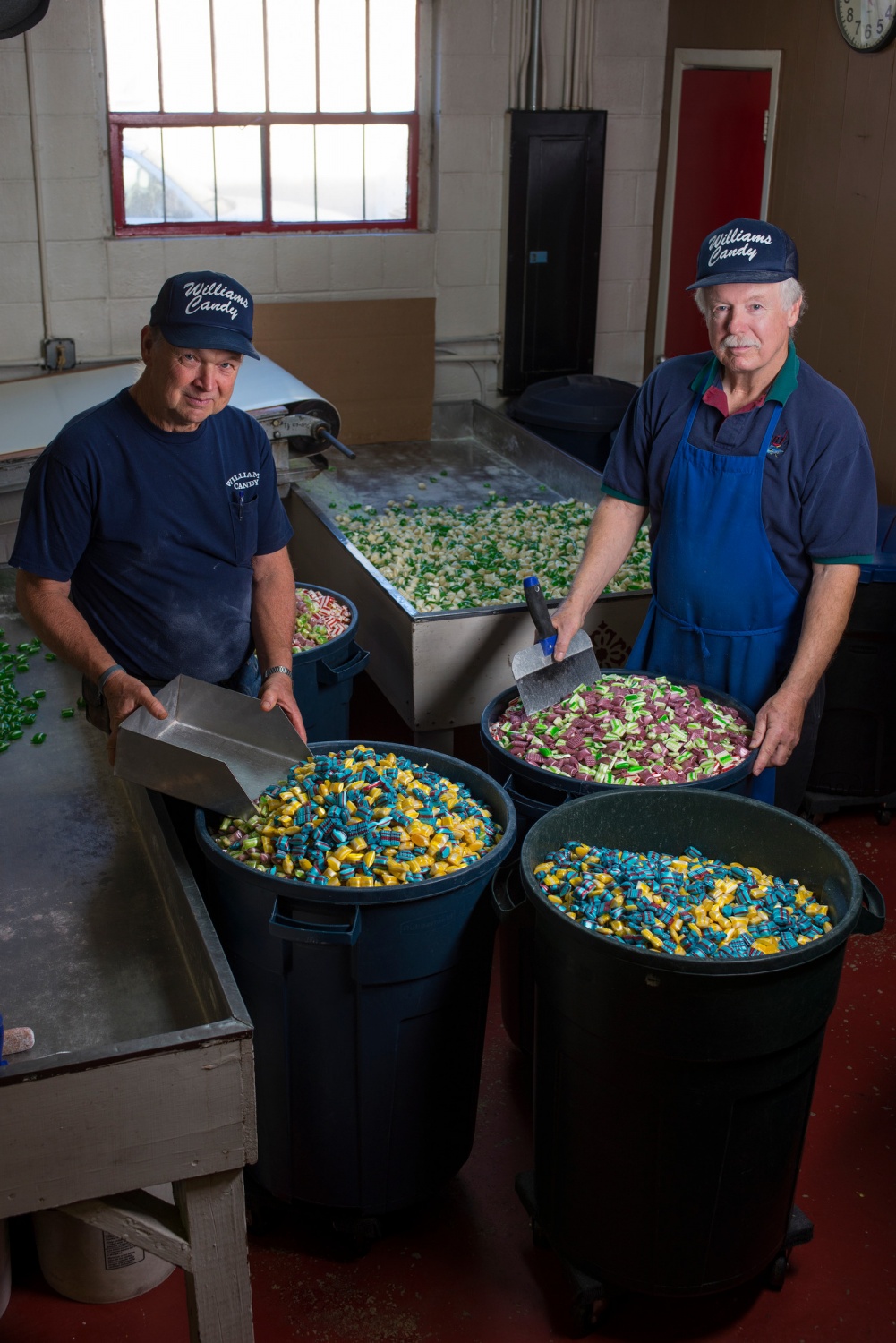 Master candy maker Gene Williams, left, makes hard candy by hand with his family at the H.E. Williams Candy Company the same way his grandfather did 100 years ago. He is apprenticing Lee Bagley on the day-to-day operations. Photographs made at the Chesapeake business on 12/18/17. Photo by Pat Jarrett/Virginia Folklife Program

The early 1900s saw a surge of independent candy makers in Virginia, with dozens of confectioners operating statewide, from Bristol to Norfolk. In 1917, a young candy enthusiast named Shafter Litchfield Williams, of North Carolina’s Outer Banks, began to hone his craft at the Weatherly Candy Company in Elizabeth City, one of the earliest mass-production candy factories in the country. After his apprenticeship at Weatherly, Williams moved to the Berkeley neighborhood of Norfolk and started the S.L. Williams Candy Company in 1919. The company has stayed in the family for generations, and in 2018 will be celebrating 100 years in the candy business, as one of the last remaining family-run hard candy producers in Virginia. While doing little to no advertising, and not participating in social media or owning a website, Williams Candy Company still maintains a throng of passionately devoted customers, often lining up for blocks to get a taste of their legendary Peach Buds, Cinnamon Swirls, or Christmas Candy. Gene, a third-generation candy-maker, grew up in his family’s candy shop, and learned the art of candy making from his father, Harold Eugene Williams, and uncle, Shafter Williams, Jr. Williams’ family lore recounts that when Gene was a toddler he would stand on a stool beside the factory machinery and correct his father and uncle’s work. When Gene is not working on his farm, he is the main candy maker at the factory, and is one of the true masters of his craft. As journalist Don Harrison wrote, “Watching the burly, smiling farmer make a steaming batch of hard candy is not unlike studying a sculptor as he works his tools or a painter mixing and dripping colors. Gene’s medium is sugar, corn syrup and food coloring.” Gene always welcomes the opportunity to teach anyone the trade, but for his Virginia Folklife Apprenticeship he is once again keeping it in the family, tutoring his cousin, Lee Bagley.