Finding My Voice in Virginia 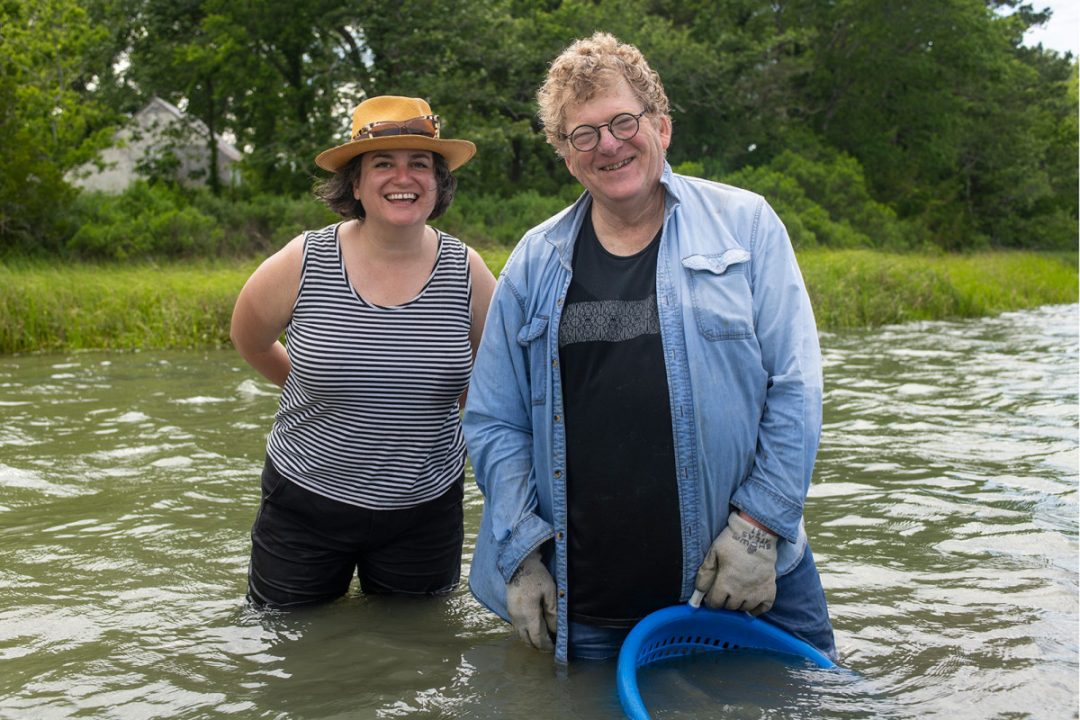 Katy with folklorist Bernard Herman in his oyster beds at his home in Machipongo on Virginia's Eastern Shore. Bernie was Katy's graduate advisor. Photo by Pat Jarrett / Virginia Humanities.

Five months ago I started work as state folklorist and director of the Virginia Folklife Program here at Virginia Humanities. My intent this first year is to be on the road as much as I can, meeting and growing relationships with people across the state to begin to understand how the Folklife Program can best serve what I like to think of as “cultural wellness” throughout Virginia. Since March 14, I’ve driven almost 3,000 miles, visited 16 cities, met with more than 50 artists and organizations, produced 6 fieldwork interviews, attended 4 festivals, hosted 3 events, and premiered 1 film. With almost half a year under my belt, I am starting to shift from listening and discovery to finding a voice to reflect on what I am learning—and what is ahead.

What follows is a quick glimpse of a few of the things that have kept me busy these first five months. In the weeks to come, I will share more details about the future of the Folklife Program and new opportunities to join our work!

In Good Keeping in 2022 Screenings

My first public event was the premiere of In Good Keeping in 2022 at the Birthplace of Country Music Museum in Bristol in June—a heartwarming celebration with many friends of the program. In July, we showed the film, which introduces our latest Apprenticeship Program cohort in the spaces in which they live and work, at the Virginia Museum of Contemporary Art in Virginia Beach. It felt especially meaningful to honor living traditions at an art museum. We chose our locations so we could feature and honor apprenticeship artists close to home. Following our September 9 showing in Fork Union, In Good Keeping in 2022 will be available to watch on YouTube. While these events are smaller scale than the beloved Apprenticeship Showcase festival, our current shift to regional programming is expanding our network and benefiting venues that are still re-growing their audiences as COVID restrictions ease.

Our Bristol film screening followed the first meeting of the Virginia Folk Arts and Culture Team, part of the Central Appalachia Living Traditions (CALT) 3-year collaboration we announced earlier this year. This project has brought me to Bristol twice already, with more visits and fieldwork in SW Virginia to come. There are many parts of the state I have yet to visit, but I’ve also been grateful for this early deep-dive into a specific geographic region. Our team includes two independent artists, and representatives from key cultural organizations including the Crooked Road and the Wayne C Henderson School of Appalachian Arts. We are working together to design funding support for folk arts in the greater Bristol region, and we expect to announce the opportunity we are developing in early 2023.

2022 marks the twentieth anniversary of the Virginia Folklife Apprenticeship Program, so for this year’s Richmond Folk Festival (October 8 & 9) we are celebrating one of the most consistent traditions we have supported across the last two decades: instrument making and repair. Virginia Folklife will program the craft demonstration area and Jon Lohman (now director of the Center for Cultural Vibrancy) will program the Folklife Stage—meaning there is now double the folklife power!

This year we are inviting 11 luthiers to the festival, including 6 who participated in our apprenticeship program since 2019. We will also be joined by two of our current 2022-2023 artists: Richard Maxham of Alexandria is apprenticing with Daniel Smith of Lynchburg in violin building. Spencer Strickland is returning to Richmond—18 years ago he took part in the first festival by demonstrating mandolin building with Gerald Anderson, who he apprenticed with in 2004-2005. I am excited to include Dena Jennings of Orange in this year’s festival. In addition to her practice as a physician, work organizing an annual Affrolachian On-Time Music Gathering (The Thang), and running Imani Works, a human rights non-profit, Dena makes gourd banjos. We will be announcing more Richmond Folk Festival artists and details in the coming weeks.

Much of the work laid out in the numbers above was done together with Pat Jarrett. Pat has documented the work of Virginia Folklife since 2012, and was interim director of the program for 18 months (in a pandemic!). Through this he directed, filmed most of, and produced the 8 videos that make up In Good Keeping in 2022. Kudos Pat! We share a dedication to excellent documentary work, and I am excited to move the Virginia Folklife Program further in that direction together.

As I honor Pat’s leadership during transition, I also want to express gratitude to the previous Virginia state folklorist Jon Lohman, who welcomed me into this role with words that could not have been kinder or more supportive. Over 19 years, Jon built the Virginia Folklife Program into what it is today, and my task is to take a well-respected, influential program with a sound foundation and make it even stronger. (Jon, know that the program is “in good keeping”!)