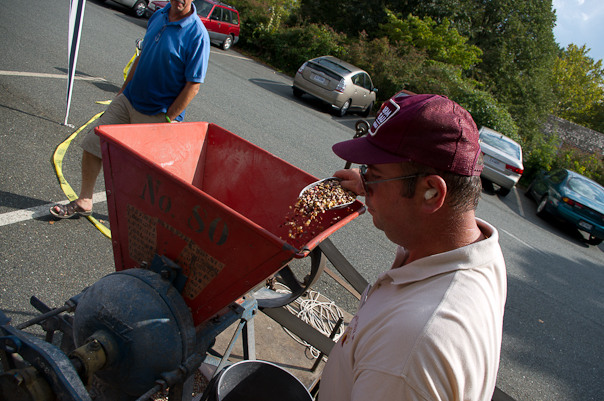 While many associate the Eastern Shore with the work of watermen, it is in fact a predominantly agricultural region. Bill Savage grew up on his family’s farm near Painter, Virginia, in Accomack County, where a great variety of vegetables were grown for shipping throughout the mid-Atlantic region. Several years ago, Bill purchased a bushel of “Indian corn” from a man whose grandfather had been growing it on the Eastern Shore of Virginia since 1870. This heirloom Indian corn has been grown by local farmers on the Eastern Shore of Virginia for more than 165 years. The corn is harvested in the late autumn, dried in an open air corn crib, shelled with a vintage corn sheller, bagged, and stored in a grain house. The corn is then stone-ground into cornmeal. Bill and his father grind the corn using traditional methods to make a unique, sweet-smelling cornmeal, which they sell through their new family business, Pungo Creek Mills. Bob Savage, Bill’s apprentice, is also his brother—a first for the Virginia Folklife Apprenticeship Program.