Behind the Cut: Hair Culture in Richmond 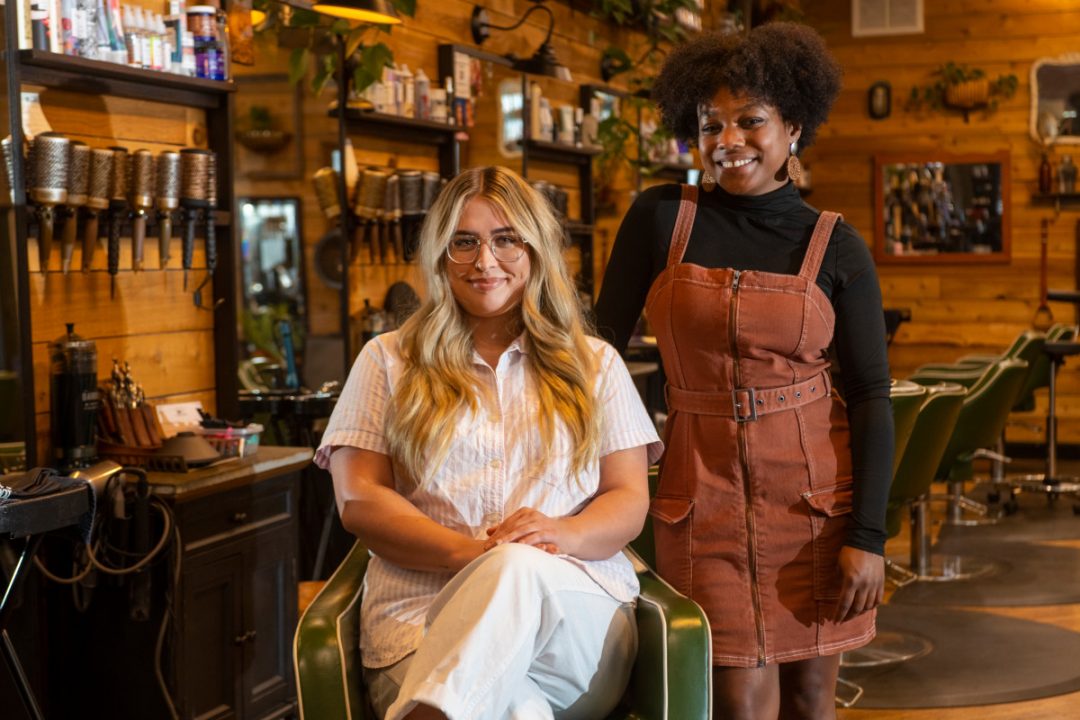 My name is David Robbins and I am an intern here at Virginia Humanities. I was graced with the opportunity work with a few of the different programs within the organization, including the Virginia Folklife Program, which invited me to consider: What story would I want to tell about culture in our state? I knew it had to be something in Richmond (RVA), where I was born and raised. Then I had to consider what would be useful to know, that I didn’t already know. I came up with something that I never thought I would write about: Hair.

I figured if I wanted to learn more about hair culture in RVA, I could start with the top, the people at the forefront of our local hair culture: Katie Blue Salon.

Right around the corner from Carytown, on Belmont Ave, is Katie Blue Salon. When you open the door (which gives a slight creak), you see salon chairs, mirrors, and stations lining the walls to the left; shampoo stations lining the wall to the right. There are mounted animal heads decorating walls, along with saddles and other country-western styled decor spread throughout salon. Me and my passenger on this ride and technical maestro, Pat Jarrett, met one of the managers of the salon, Tiffani Hill, at their front door.

Coincidentally, I needed my haircut, so I figured that I might as well kill two birds with one stone and I asked if Tiffani could give me a cut while we talked. After getting the equipment set up—for the interview and the haircut—we started our interview. I also talked to another one of their stylists, Morgan Gordon, afterwards. Hill has worked for Katie Blue for five years, and has been doing hair for two. She started out on the reception desk and focused on their social media before starting their apprenticeship program two years ago. Hill, now a stylist, was recently promoted to a manager in order to help with business operations. Gordon, originally from Virginia Beach, has been doing hair since she was 15 and has only worked for Katie Blue for about a year. They both had unique and interesting takes on hair culture and I learned so much from my conversations with them.

Tiffani shared the positive aspects of RVA hair culture. She spoke about the return to more curly, natural styles, as well as creative and fantasy colors. As a hair stylist, she considers herself responsible for equity in beauty standards.

“I would say that in general, European and Eurocentric styles are going out of style, More people are looking for lived in, natural looks that they don’t have to put too much work into,” shared Hill. “I definitely think there’s a little bit of a responsibility [for the stylist], because people don’t know much about hair. There’s a lot of chemistry and geometry that’s involved. Sometimes there’s a lot more education that people need on how to deal with their own hair.”

“I really love the fact that we harp in on people embracing their natural textures. The fact that we’re a curly salon, with a black manager, that is placed number two—it makes me proud.”

Katie Blue Salon was voted number two best locally owned hair salon in Richmond Magazine in 2020. Tiffani is a young black woman. I asked her what it felt like to manage such a high caliber salon, being a young black woman. She said, “Pretty awesome, honestly. I really love the fact that we harp in on people embracing their natural textures. The fact that we’re a curly salon, with a black manager, that is placed number two—it makes me proud.”

I had to ask what she meant by a curly salon. Her answer, “A lot of artists, like hair artists, specialize in different things. Curly hair is one of the things that we really focus on.”

Gordon, the other stylist that I talked to, shared the difference in doing hair in Virginia Beach and Richmond, and how she felt more comfortable being herself in Richmond, and especially in a curly salon.

“Virginia Beach is a lot more conservative. That ties into I think everyday life in the sense that we’re kind of getting back to more of everyone’s hair straight,” said Gordon. “Doing hair in Richmond, I have learned a lot of stuff that I felt uncomfortable with just due to lack of experience. So it’s been cool to kind of grow in that aspect. People are a lot more carefree in a sense here—willing to take more risks.”

Gordon also talked about the intimacy of doing people’s hair, and how that links back to different cultures. “It’s such an intimate job. That’s something too, that is so kind of, like forgotten about. In certain cultures, washing people’s hair is really intimate and for their family. The fact that I’m working so close to people’s brain. I sometimes feel their energies, you know what I mean? So it’s genuinely very intimate.”While we all talk to our stylists and barbers to some degree when we get our hair cut, through interviewing Hill and Gordon at Katie Blue Salon, I discovered that you can learn a lot about a city and its people through the “hair artists” that help us look our best.

David Robbins, born in Richmond, Virginia, is a senior at Virginia Commonwealth University. He is studying Political Science with a concentration in Civil Rights, as well as Economics.  He is the Chapter President of Pi Lambda Phi Fraternity, Virginia Omega Rho Chapter and has played guitar since he was 14 years old, having played mostly in different church bands, but has recently started to practice more with rock and country. David did his freshman year of college at Grove City College, then took three years off to find his way and figure out what he wanted to do with his life. In that time he worked at multiple restaurants in Richmond, including becoming a manager at Chick-fil A and Applebee’s. He is currently working as an Office Assistant at the Office of Multicultural Student Affairs at VCU and interning in the Office of Community Initiatives at Virginia Humanities. David plans to go to law school and work in the nonprofit sector to help underprivileged people and communities see the changes they want to in the system and in the world.