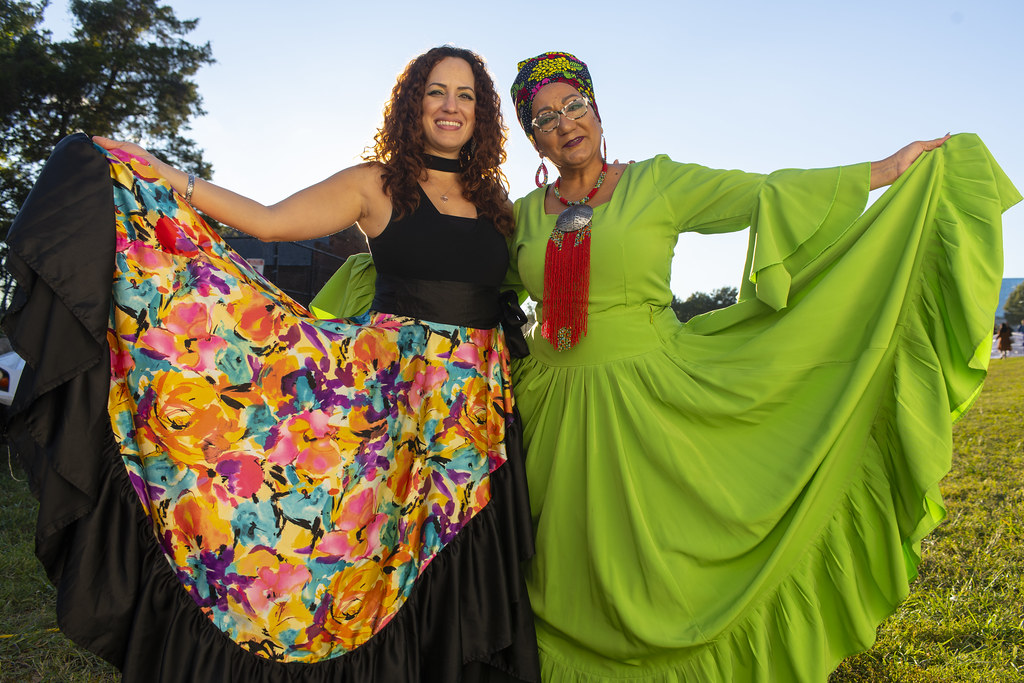 Isha M Renta Lopez (left) of Fredericksburg is apprenticing in bomba dance with Tata Cepeda of San Juan, the first cross-ocean Virginia Folklife apprenticeship. The women pose following their Richmond Folk Festival performance. “I have no words to express my happiness and pride for the weekend’s events,” shared Lopez. Photo by Pat Jarrett, Virginia Humanities

For thirty-three years, the Virginia Folklife Program at Virginia Humanities has worked to document, sustain, present, and support cultural traditions across the Commonwealth. I began work as the third Virginia state folklorist in March 2022, and as I get settled into the position and move around the state visiting artists, community leaders, and events, I am also thinking about how to shape its future. Folklorists embrace the transformation of traditions as they move through generations—in turn, I intend to both honor the Virginia Folklife Program’s legacy and make some significant adaptations to meet the current moment.

“The Congress hereby finds and declares that the diversity inherent in American folklife has contributed greatly to the cultural richness of the Nation and has fostered a sense of individuality and identity among the American people . . . [and] that it is in the interest of the general welfare of the Nation to preserve, support, revitalize, and disseminate American folklife traditions and arts.”

State folklife programs were piloted at arts councils by the National Endowment for the Arts starting in 1974. In 1976, as the United States was celebrating its bicentennial with patriotic optimism, the American Folklife Center was established at the Library of Congress. The legislation, quoted above, ties the health of diverse American folkways to the “general welfare of the Nation.” Thirteen years later, the Virginia Folklife Program was founded at Virginia Humanities, thanks to the commitment of University of Virginia scholars and folklorists Charles and Nan Purdue; the Virginia Folklore Society; Robert C. Vaughan III, Virginia Humanities’ founding director; and Garry Barrow, Virginia’s first state folklorist.

Read this story in “Views” Magazine

Nurturing cultural well-being feels especially crucial as we emerge from the COVID-19 pandemic and face deep partisan divides that threaten to make us focused on our differences, rather than what we have in common. Our personal, family, and community traditions ground us in feelings of belonging and pride—and sharing these cultural expressions with others creates opportunities to connect individuals across boundaries to increase understanding and respect. As Dylan Locke, owner of the Floyd Country Store and steward of its decades-old Friday night jamboree tradition, put it when I met him in April, participating in community arts amounts to “civic repair.” My task ahead is to grow the network of artists and organizations we serve and inspire an ever-growing audience that values our collective cultural “welfare.”

Cultural welfare and wellbeing are at the core of our Virginia Folklife Apprenticeship Program. Jon Lohman, my predecessor, established this program in 2002 with essential funding from the National Endowment for the Arts that continues today. This year marks its twentieth anniversary, and to date, the program has provided funding and a public platform to 142 teams of artists (319 total practitioners) considered masters of their craft and those eager to learn beside them. I met Reverend Tarrence Paschall, who was part of the very first cohort of traditional artists, this June when we recorded him singing with The Chosen Few for an online concert hosted by the American Folklife Center. Paschall was the leader of the Tidewater a cappella gospel quartet The Paschall Brothers. He shared that the opportunities the Folklife Program opened for The Paschall Brothers were nothing short of transformative: “We’ve been to some tremendous places that would not have been open to us otherwise.” The warmth of his singing, in harmony with the six other singers in The Chosen Few, was warm and powerful, embodying the lasting impact of that initial support.

As the Apprenticeship Program enters its third decade, we are celebrating its impact and charting a course for its future. We have doubled the award amounts to meet the national average for like programs. A thorough evaluation of what people, traditions, and places have been served to date will make clear who we must invite moving forward. We are also shifting our emphasis from festival production to a variety of smaller events across the state that celebrate tradition bearers in their home communities. By moving away from the annual Apprenticeship Showcase at James Monroe’s Highland, we can expand our offerings in other areas. In June, we premiered “In Good Keeping in 2022,” a documentary featuring the 2021–2022 apprenticeship artists at the Birthplace of Country Music Museum in Bristol. This feature-length film was produced and directed by Pat Jarrett, digital media specialist for Virginia Humanities, while he served as interim director for the Folklife Program and is named in honor of a 2007 publication by Lohman. In addition to community screenings, these films are available on our YouTube channel—and hopefully to even broader audiences as we continue to grow our partnerships with public media across the state.

Moving forward, the Folklife Program will invest more in documentation and fieldwork, including growing the number of voices that tell the story of contemporary cultures in Virginia. We recently launched a paid writing and media production opportunity for our “Sights & Sounds” blog. In the future, I hope to establish funded, twelve-week fieldwork fellowships. As a result, the kinds of living traditions we showcase and present to the public will grow even more diverse.

We will also invest in our archives. My goal is to make this ever-growing collection of fieldwork recordings and performances fully cataloged and publicly accessible online before the program’s thirty-fifth anniversary in 2024. Currently our holdings are split between the Library of Virginia, internal hard drives, and Discovery Virginia—Virginia Humanities’ online repository. Having these materials catalogued in one place, and safeguarded for posterity, will in turn empower us to offer consulting support—or even a permanent home—to community collections around the state.

Twenty years after the Paschall Brothers participated in our apprenticeship program, another mentor artist, Bernadette Lark of Roanoke, is teaching gospel in the 2022 apprenticeship class. However, rather than a tradition rooted in Virginia, she is a master of singing in the Gullah-Geechee style of her birthplace, coastal South Carolina. Her apprentice is Alanjha Harris, who has kept singing throughout the challenges her family continues to face as a result of a random act of gun violence: Her brother was shot by someone passing through their apartment complex parking lot in 2019. Their apprenticeship is empowering these artists to carve out a refuge to focus on their singing. Lark explained her commitment to using the arts for positive social change, saying, “If you are lucky enough to be involved in good works, slow down to take a look and see who is missing.”

Lark’s question is at the core of that founding charge issued by Congress to explore “the diversity inherent in American folklife.” As I listen, look back, and shape the future of the Virginia Folklife Program, I am keeping her words in mind. What Virginians, and Virginia traditions, do we have yet to serve? At its heart, cultural continuation requires a near-immeasurable resource: individual wellness. So, I am also asking, how can the Virginia Folklife Program work in support of our collective cultural wellness—and maybe even improve “the general welfare of the nation” a little bit in the process? 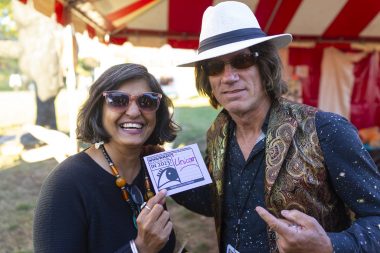 We Are Part of a CommonWEALTH of Cultures

At the Richmond Folk Festival this October, we invited visitors to tell us what sorts of performances and cultural expressions they would enjoy next year and beyond.  We commissioned Sushmita …