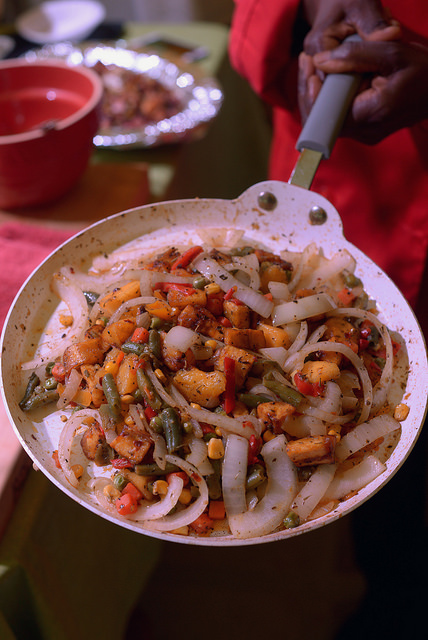 What makes the Virginia Folklife Apprenticeship Showcase special? The unique stories of the food purveyors who participate in this annual event. This year’s Showcase on Sunday, May 7 at James Monroe’s Highland from 12:00 to 5:00pm will feature several master artists demonstrating their skills plus a special guest serving up delicious eats for the public to enjoy.

Those familiar with Joey’s Hot Dogs, in Richmond’s West End, know these dogs are the pinnacle of what is one of America’s iconic foods. Joey’s father, Tony, started serving hot dogs at age fourteen at the start of World War II in 1939, when he worked for Bacali’s Hot Dogs in Norfolk. Known to many as “The Hot Dog Boy,” Tony sold hot dogs to celebrities such as Frank Sinatra and Sammy Davis, Jr., when they came to perform and stay at Virginia Beach’s first resort hotel, the Cavalier Inn. His mother, Geri, had worked at the soda fountain at the nearby People’s Drug Store. Tony and Geri married in 1950, and in 1962, Geri opened Tony’s Hot Dogs in Norfolk. Initially, she also served hamburgers and root beer floats, but when Tony took over running the business a couple of years later, he scaled back to just hot dogs with mustard, onions, and chili—no ketchup or chips allowed. In 1969, they opened a second store in Virginia Beach, which soon became a prominent fixture in the Beach’s culinary landscape. Joey carries on the tradition, using the same chili recipe his dad served back in the 1930s. Joey has worked with his apprentice Logan Caine, but can’t decide whether he will share the secret family chili recipe. Joey and Logan will both be serving up these delicious dogs at the Showcase.

In 1980, Ida MaMusu fled war-torn Monrovia, Liberia, and came to the United States. Her grandmother, Ida Williams, was originally from Reston, Virginia, and went to Liberia as part of the American Colonization Society, a movement sending freed slaves back to Africa. Under her grandmother’s tutelage, Ida learned the art of cooking. When Ida MaMusu fled the war, she had no choice but to leave her entire family behind. She arrived in Richmond in 1986 and worked for the next decade to bring her two children and parents to the United States. After opening Braids of Africa on Broad Street in 1996, Ida found herself not only doing hair, but cooking meals for her customers. Inspired, she opened her first restaurant space next door in 1998, eventually moving to a smaller, better-located space on Main Street. Ida’s grandmother always told her that the things she learned from her were not hers to keep—that she must pass them on to keep her memory alive. In 2002, Ida started Chef MaMusu’s Cultural Cooking School to pass her knowledge on to young girls. Chef MaMusu will be cooking up some of her vegetarian specialties at the Showcase.

What began—according to local legend—as a communal meal prepared for a hunting expedition in Brunswick County on the banks of the Nottoway River in 1828, has since become a time-honored regional tradition. The cooking of Brunswick Stew is now a staple at community gatherings, a source of local pride, the focus of spirited competition, and a true Virginia culinary art. Recipes for stews, which are prepared to feed hundreds of people from one pot, are guarded vigilantly. Stew chefs traditionally apprenticed with “stewmasters,” a title that takes years to attain. John D. Clary began helping to prepare Brunswick stew in 1973 and eventually ascended to the level of stewmaster in 1988. John has been an avid participant in the “Stew Wars” with Brunswick, Georgia, which also asserts a claim to the stew’s origin. His crew has won numerous cook-offs in Brunswick County over the years. With his fellow stewmasters Lonnie Moore and the late Phil Batchelor, he has mentored dozens of apprentices over the years, including members of the Proclamation Stew Crew: Chiles Cridlin, P.L. Baisey, Bobby Swain, Terry Swecker, Richard Bailey, John Norton, Quinton Nottingham, and Bimbo Coles, among many others. They will cook any size stew, anywhere, for anyone, as long as it doesn’t interfere with a Virginia Tech football game. For the Showcase, they will prepare 500 quarts for sale for the public to enjoy on site or take home.

Known as “Fried Apple Pies,” “Dried Apple Pies,” or even “Fried Dried Apple Pies,” these locally made pies seem to have a ubiquitous presence throughout Southwest Virginia, appearing on the counters and shelves of country stores, gas stations, and community festivals. The defining characteristic of the pie is its intense flavor, accomplished through the use of dried apples rehydrated through a long simmering process with brown sugar. While each community likely stakes a claim for one of its local pie makers, Frances Davis of Rocky Mount takes the title as the ultimate “Fried Apple Pie Lady.” Her delicious fried-dough pies have been featured at festivals around the state. Frances was one of six children born to a sharecropping family. She learned to cook from her mother, and by the age of twelve was responsible for cooking for her entire family, as well as caring for other children too young to go to the fields. “I had to get up each morning around four, get the fire started to heat the house, and then be sure to have three full meals ready when the grownups came in from the field. Honestly, I didn’t really have a life as a child, because I had a big responsibility.” This responsibility led Frances to become one of the most respected and creative home chefs in the region and one of the most popular participants of Folklife festivals around the state.

For communities on Virginia’s Northern Neck from the mid-1800s to the mid-1900s, the oyster fishery was perhaps the largest and most influential industry. Men and women employed in the fishery worked in a variety of jobs, from boat cook, captain, and crew to working in shore-based scow gangs or as shuckers. Shucking, in particular, provided many employment opportunities for African Americans throughout the Chesapeake Region. Though the oyster industry has experienced a dramatic decline since the mid-1990s, the art of shucking has continued as a highly competitive sport. Sisters Deborah Pratt and Clementine Macon Boyd, whose parents met while working in one of the many small oyster houses that once dotted the Northern Neck coastline, are two of the top shuckers in the world, capable of opening two dozen oysters in less than three minutes. They have alternated in winning the U.S. National Oyster Shucking Championship for the past few years in St. Mary’s City, Maryland, as well as at the Virginia State Championships held each year in Urbanna, Virginia. The two sisters have battled it out in five epic contests on the Virginia Folklife Stage at the Richmond Folk Festival, and annually at our Virginia Folklife Showcase. At the Showcase, Deborah and Clementine will demonstrate how to shuck a “pretty” oyster, and will provide a taste of some delicious Rappahannock oysters.

Christina “Tina” Ingram-Murphy is the youngest daughter of the late Richmond gospel legend Elder Maggie Ingram. Born July 4, 1930, on Mulholland’s Plantation in Coffee County, Georgia, Maggie began playing the piano and singing at an early age, and developed a great love for the church and the ministry of the Gospel.  In 1961 Maggie moved her family to Richmond, where she formed the group Sister Maggie Ingram and the Ingramettes with Tina and her other four children. The Ingramettes performed for more than 50 years, becoming Richmond’s premiere gospel group. As a single mom, Maggie had very few resources and often struggled to keep her family afloat.  “You know how you hear about those people who say they were poor and didn’t know they were poor?” Maggie’s eldest daughter Almeta likes to ask. “Well, we knew we were poor.” Almeta remembers how Maggie managed to prepare delicious meals for her children by stretching the most sparse and inexpensive of ingredients, even feeding many more than just her own family. The Ingrams are still known for their remarkable community work, providing meals for the homeless, shut-ins, and anyone in need of a healthy meal in and around the Richmond region. The Folklife Program had a taste of the their culinary prowess at the 2016 Richmond Folk Festival, where the Ingramettes prepared more than 500 meals for festival patrons, with Tina running the show.

Tina retired from singing with the Ingramettes to care for her family and ailing husband, which gave her more time to hone her culinary skills. She regularly consulted with Maggie to learn certain dishes, and learned from elder women at her church. Over time Tina became a master of what many call “Soul Food,” the tasty and resourceful home-cooking style associated with African Americans in the South.  While drawing heavily from tradition, Tina also makes healthy adjustments to her recipes. Her favorite dishes include candied carrots, purple cabbage, strawberry-banana pudding, southern cornbread, garlic mashed potatoes, turkey, meatloaf, baked spaghetti, and collard greens. Tina will share family kitchen lore with daughter Cheryl Maroney Beaver, a current Ingramette who has participated as a Master Artist in gospel singing in the 2014 Apprenticeship Program.

We thank our sponsors: