Joey’s Hot Dogs on the menu for Showcase 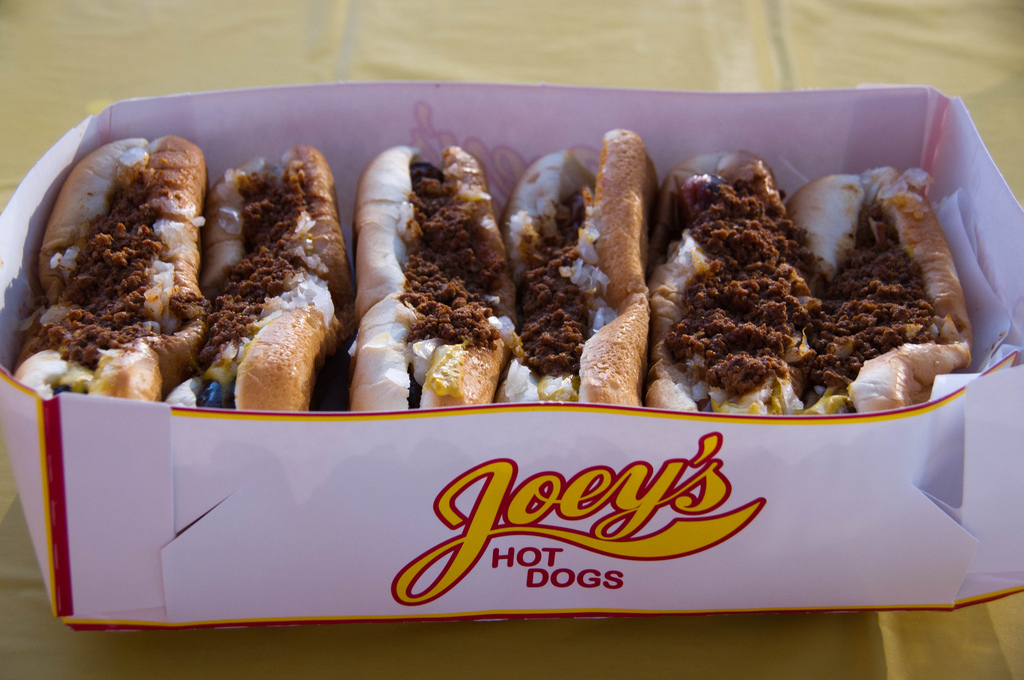 We are thrilled to announce an exciting addition to the Showcase this year. We are bringing one of our favorite true folk masters of the Commonwealth… yes, Joey Mirabile, Richmond’s uncontested champion of the hot dog. Look for the truck with the dancing hot dog pouring mustard on his head.

Below is a short bio we wrote back in 2011 when we celebrated “Virginia Contest Traditions” at the Richmond Folk Festival. In retrospect, I realize writing that he has “hot dogs in his blood” was probably not the best choice of words.

In Richmond we held an open hot dog eating contest, judged by the reigning “Ms. United States,” as well as Bryan Randall, the quarterback for the Richmond Raiders, another guy who always shows up at the festival dressed as Uncle Sam, and Santa Claus (who at one point stopped being a judge and joined in on the competition). The contest was won by a walk-on competitor who didn’t even know there was a contest until 10 minutes before start time.

Alas, Sonya Thomas, the “Black Widow” couldn’t come as she is contracted by the MLE (Major League of Eating) and isn’t allowed to compete in any MLE unsanctioned event, which is under a strict exclusive contract with Nathan’s Hot Dogs.

Joey’s Hot Dogs, in Richmond’s West End, is for many the pinnacle of what is one of America’s iconic foods. Joey Mirabile has hot dogs in his blood. His father, Tony, started serving hot dogs at age fourteen at the start of World War Two in 1939, when he worked for Bacalis Hot Dogs in Norfolk. Known to many as “The Hot Dog Boy,” Tony often sold hot dogs to celebrities such as Frank Sinatra and Sammy Davis Jr. when they would perform and stay at Virginia Beach’s first resort hotel, the Cavalier Inn. His mother, Geri, had worked at the soda fountain at the nearby People’s Drug Store. Tony and Geri married in 1950, and in 1962, Geri opened Tony’s Hot Dogs in Norfolk. Initially, she also served hamburgers and root beer floats, but when Tony took over running the business a couple of years later, he scaled back to just hot dogs with mustard, onions and chili—no ketchup or chips allowed. In 1969, they opened a second store in Virginia Beach, which soon became a prominent fixture in the Beach’s culinary landscape. Joey carries on the tradition, using the same chili recipe his dad served back in the 1930s. He also hosts occasional hot dog eating contests, which is fitting as Virginia is home to one of the competitive eating circles’ greatest stars, the diminutive “Black Widow” of Alexandria, Virginia.